Lizzo responded: "...this IS the best thing I've watched all day" 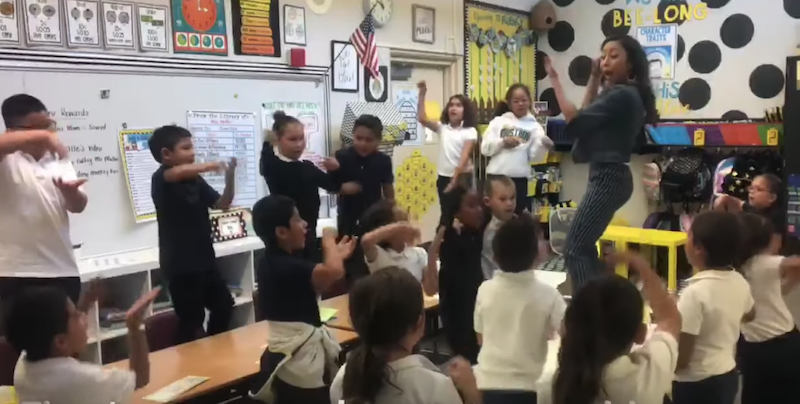 While a bunch of second graders singing Lizzo’s “Truth Hurts” doesn’t sound totally appropriate, it turns out it’s the perfect empowering anthem if you get the right educator involved. Teacher Dorthy Honey Mallari of Pittsburg, California’s Los Medanos Elementary School re-wrote the lyrics to the Billboard chart-topping hit to inspire learning, and performed it with her students in class.

A viral clip shows Ms. Mallari dancing across the tops of tables (in heels), surrounded by singing students moving through bits of dance moves. While Lizzo’s version of the track aims at a relationship breakdown, Mallari’s classroom remix features more kid-centric lines like, “Let’s be great, ‘cuz I know we are great/ I just took an ELA test, turns out I’m 100% that smart/ Even when I’m feeling lazy.”


After Pittsburg Unified School District shared the video on Twitter, it instantly took off, eventually making its way to Lizzo herself who responded by tweeting, “…this IS the best thing I’ve watched today.”

In an interview with KRON4 News, Mallari talked about the song’s power on setting the right mindset for the classroom. “As soon as we sing that song it’s like a time for us to exhale, be in that moment, feed off each other’s energy, and just give the freedom to have fun learning with our day,” she explained.

Who knows, maybe the teacher and her students will soon be making onstage cameos at Lizzo shows alongside child actor Macaulay Culkin.

See the full video below, and catch Lizzo’s upcoming shows by getting tickets here.

Ur right.. this IS the best thing I’ve watched today 😍 https://t.co/4LBbVz8gxn