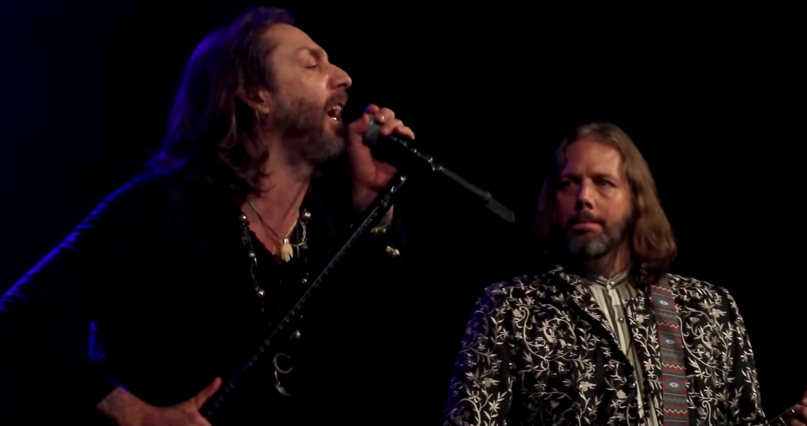 On Monday, The Black Crowes formally announced their massive Shake Your Money Maker 30th anniversary tour. Just a few hours later, the Robinson brothers were back on stage together for the first time in five years, reuniting for a warm-up gig at New York’s Bowery Ballroom.

As expected, the band played straight through their 1990 debut full-length, including favorites like “Hard to Handle”, “She Talks to Angels”, and “Jealous Again”. Left off the setlist was the hidden track “Live Too Fast Blues”/”Mercy, Sweet Moan”, as well as the reissue bonus cut “Don’t Wake Me”. Instead, they included a cover of The Rolling Stones’ “It’s Only Rock n’ Roll” as the encore.


Joining Chris and Rich Robinson in this latest incarnation of The Black Crowes was a new touring lineup: guitarist Isiah Mitchell of Earthless, keyboardist Joel Robinow and drummer Raj Ojha of Once and Future Band, and session bassist Tim LeFebvre (David Bowie’s Blackstar). Steve Gorman, the band’s longtime drummer who recently released a tell-all memoir about his experiences with the group, reportedly won’t take part in the upcoming tour.

Plenty of footage from the Bowery show has popped up online, and you can watch some highlights below. The complete setlist follows.

The Black Crowes will play another preview concert in Los Angeles on Thursday (November 14th) before launching the full Shake Your Money Maker tour next June. Find tickets to all their dates here.

“She Talks to Angels”:

Below, revisit Chris Robinson’s recent appearance on Kyle Meredith with…