by Chris Malone and CoS Staff 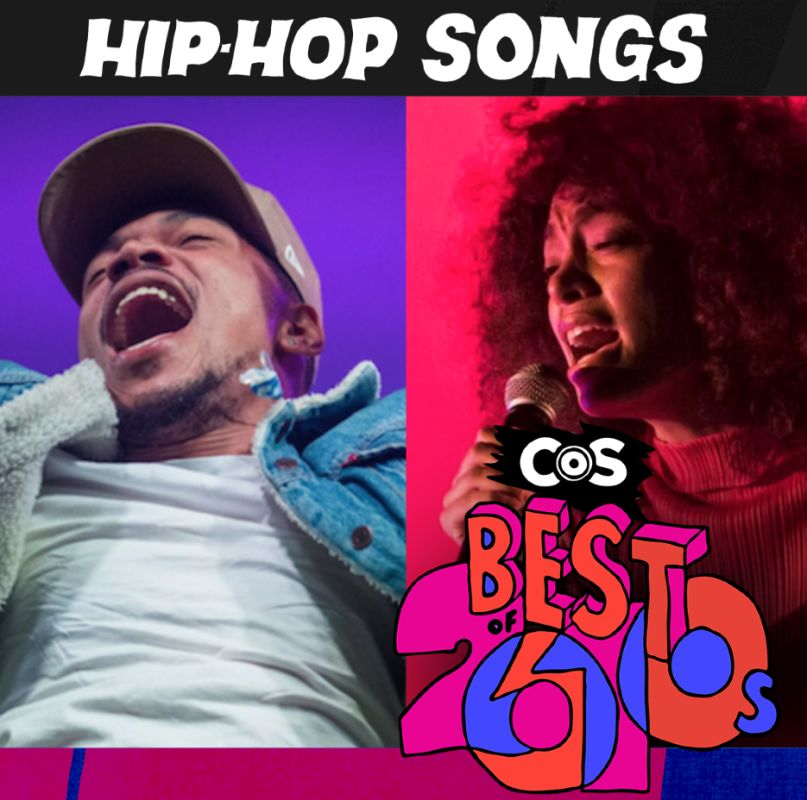 Join us all month long as we celebrate the best music, film, and television of the decade. Today, we continue the celebration with the Top 25 Hip-Hop and R&B Songs of the 2010s.

If the late ’80s and early ’90s were the Golden Age of hip-hop, then the 2010s for the genre would be akin to a Bronze Age: a pivotal point in history that is as innovative in relation to the past as it is foundational to the developments that will come in the future.

When Nicki Minaj stopped by Queen Latifah’s talk show in 2013, the significance of the occasion wasn’t lost on either of the two legendary femcees: “I’m sitting here with a female rapper on a talk show started by a female rapper,” Latifah says to thunderous applause, which Minaj calls “a great moment for hip-hop.” At the time, Nicki was considered the torchbearer for women in hip-hop –something Latifah noted in their interview — so a new crop of women rappers, each sharing their unique styles with the world, is a sight for sore eyes that many hip-hop fans know has been a long time coming.

Besides the explosion of new artists of all genders in the last 10 years, hip-hop has seen a handful of artists make their steady climb to the top of the heap. Take Drake, for example: at the start of the decade, he was a burgeoning rapper with a debut album after first entering the public eye on TV, and — regardless of what you may think of him — he now holds multiple sales and Billboard charts records. The same can be said for rhymesmiths like Kendrick Lamar and Childish Gambino, with the latter making a successful crossover from TV to music (and back again) while Lamar is consistently lauded for releasing multiple masterpiece LPs in the span of only a few years.

In a similar vein, R&B also saw the emergence of new talents, as well as the continued success of established icons. The genre-bending ways of Janelle Monáe and Tinashe became the rule rather than the exception, laying the groundwork for newcomers like Summer Walker and Bryson Tiller to easily come in and introduce their sounds to more receptive audiences. Meanwhile, greats like Erykah Badu and Mary J. Blige enjoyed their legacy status with scattered releases and music festival performances, making way for a new generation of artists ready to shape the ever-changing R&B landscape.

Up until the beginning of this decade, hip-hop and R&B remained in relatively separate spheres, with few artists daring to mix elements of both when creating their sound. Now, it’s becoming increasingly harder to pin down new releases from these artists that are purely one or the other. While pop tends to pull elements from the hot genre du jour, this cross-pollination between hip-hop and R&B has been much more fascinating to watch and much more interesting as a musical and cultural phenomenon: in these arenas created and dominated by people of color, it’s incredibly inspiring to see these artists support each other, whether consciously or subconsciously, through the blending of different sounds into their own work.

With exciting new trends, artists, and subject matter proliferating over the last 10 years, the 2020s are shaping up to be a renaissance of sorts for both hip-hop and R&B. But the question remains: what will that renaissance look like and, more importantly, sound like?