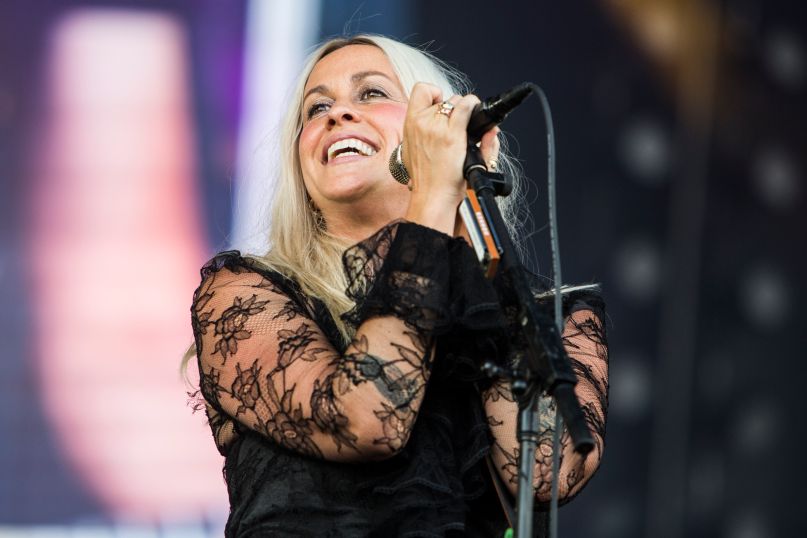 Next summer will mark the 25th anniversary of Jagged Little Pill, the seminal alt-rock album by Alanis Morissette. The Canadian singer-songwriter is celebrating with a Jagged Little Pill-inspired Broadway musical, which opens this week, as well as a new anniversary tour that kicks off in June. That may be half a year away, but not everyone had to wait that long. At the Apollo Theater in New York Monday night, Morissette gave the sold-out crowd a tour preview, and from the sound of things, it’s going to be epic.

As reported by Rolling Stone, the 17-song acoustic set included favorites from Jagged Little Pill like “You Oughta Know”, “Ironic”, and “Hand in My Pocket”. There was lively audience banter, including jokes about the amount of chamomile tea she drank and “the pee I’m gonna have later.” At one point Morisette asked the crowd to “keep the creepy uncles in the back,” and later she debuted “Predator” from her upcoming musical. Morisette also played “Uninvited” from the City of Angels soundtrack, and for the first time she performed “Smiling” from her soon-to-be released ninth studio album, Such Pretty Forks in the Road.


Such Pretty Forks in the Road is due out May 1st, and so far we’ve heard “Reasons I Drink”. The musical adaptation of Jagged Little Pill is currently in previews, with the official opening this Thursday, December 5th. Get your tickets here.

Tickets to Alanis Morissette’s “Jagged Little Pill Tour” go on sale Friday, December 13th. First you’ll have to check Ticketmaster, but once they’re sold out, you can find them here via Stubhub.

Setlist:
Your House
You Learn
All I Really Want
Not the Doctor
Forgiven
Perfect
Right Through You
Smiling (live debut)
Head Over Feet
Mary Jane
Hand in My Pocket
Predator (live debut)
Ironic
You Oughta Know
Wake Up
Uninvited
Thank U