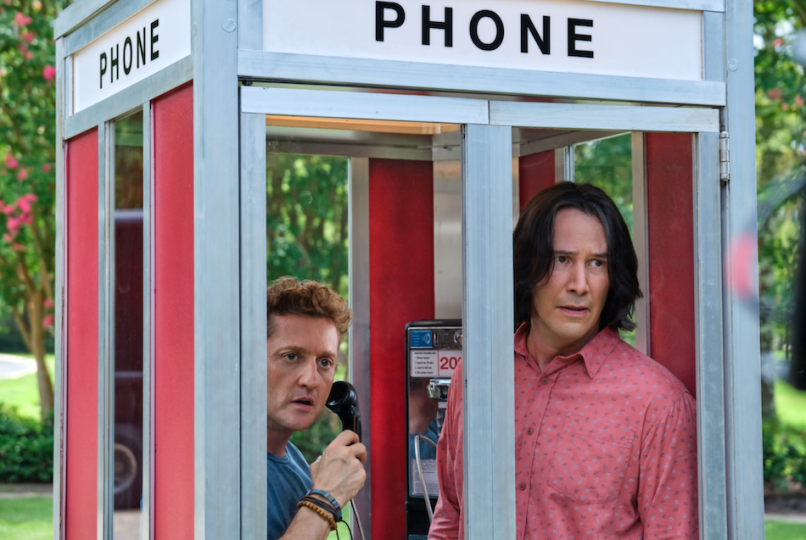 Whoa! After nearly three decades, Bill & Ted Face the Music is finally, actually happening. The threequel finds stars Alex Winter (Bill) and Keanu Reeves (Ted) returning as the titular time-traveling dudes, surrounded by some familiar faces and new historical figures. Today, we get our first look at the long-awaited comedy in a series of new pictures.

The first image sees Bill and Ted back in the phone booth, looking a bit more buttoned up and wearied than the last time we saw the heroes (in 1991’s Bogus Journey). Thankfully, they have some young blood around them to keep them feeling cool, including their daughters, Thea Preston (Samara Weaving) and Billie Logan (Brigette Lundy-Paine), and their pal Kid Cudi. Death (William Sadler) also returns from the underworld, hopefully not to bring Bill and Ted back down with him.

Check out the images below.

“The stakes are higher than ever for the time-traveling exploits of William ‘Bill’ S. Preston Esq. and Theodore ‘Ted’ Logan. Yet to fulfill their rock and roll destiny, the now middle aged best friends set out on a new adventure when a visitor from the future warns them that only their song can save life as we know it. Along the way, they will be helped by their daughters, a new batch of historical figures, and a few music legends — to seek the song that will set their world right and bring harmony in the universe.”