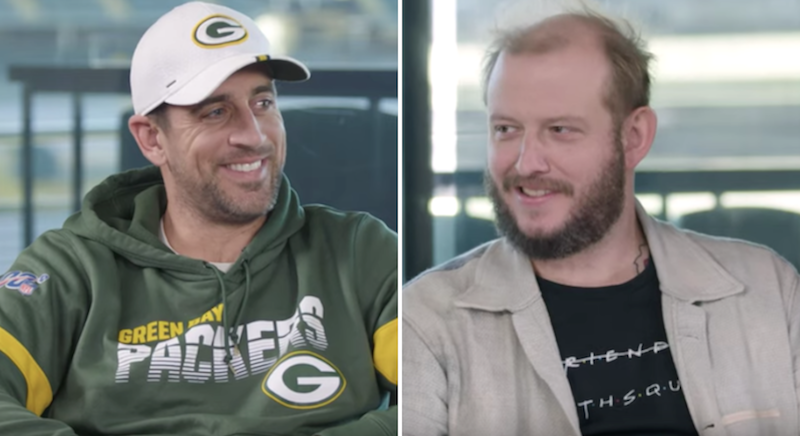 Bon Iver’s Justin Vernon and Green Bay Packers quarterback Aaron Rodgers recently sat down together as part of GQ Sports’ One-on-One interview series. That might seem like an odd pairing at first, but it actually makes a lot of sense. Besides both being Wisconsin heroes, Vernon played tight end in high school and Rodgers is well-known for his Bon Iver fandom. In fact, the band is part of his pre-game warmup mix, as he revealed during the discussion.

The pair had met before, with Rodgers inviting Vernon to watch a 55-7 routing of the Titans and the musician gifting the athlete a Gisbon ’74 Walnut 345. Over 40 minutes, they shared an insightful conversation focused largely on what truly matters in success. Vernon admitted that acclimating to notoriety was difficult, saying, “I think I wasn’t well for a couple of years adjusting to my minor version of being well-known or semi-famous, all the attention and things like that. I had to deal with therapy just to clear out all of the junk. I had to re-center everything.”


When Rodgers revealed that, as an introvert, he had trouble coming to terms with being a famous sports star, Vernon related. He said he’d “struggled” with his career and for awhile “it wasn’t good, it wasn’t fun.” Now, however, he’s “much happier doing music than I have [been]… It feels like it was before all this happened.”

A lot of that has to do with how Bon Iver has progressed as a group project. Vernon explained, “I have talent and I’ve worked really hard; I feel like I deserve the stuff that’s come towards me, but the thing I’m most proud of is the folks I’ve allowed to be around me, the bandmates. We now have language that nobody else has. It’s not even a competitive thing, we’re just able to speak deep.”

He went on to say that he hadn’t “been in the mindset” to write for some time, having to “sit in the studio for years to create enough material to turn them into songs.” Now, with his core group of Bon Iver collaborators around him, he’s more at ease:

“The Bon Iver squad feels so healthy and challenged. We’re operating at a high level really. And it’s because I’ve been able to relent and get rid of a lot of my discussion making or needing to be too hands on of a leader. I just feel like I’m one of the cogs in the machine, and now when I go home the silence is not deafening. There’s actually something I’m hearing in my head, something there that I can pull at and see what comes out of it. That hasn’t happened since before all this happened to me.”

The two also connected over fond memories of Eau Claire, Vernon’s hometown. That led Rodgers to ask about “Holocene”, one of his favorite tracks and one of the best songs of the 2010s. Vernon recalled getting high with his brother after watching Inglourious Basterds and walking around town during an ice storm. He continued,

“And it really just came out, ‘At once I knew I was not magnificent…’ It was one of those moments where you’re not sure if you’re really the creator of something or not, or if you’ve just been handed something to share. It’s easy to stay humble sometimes when you know I’ve worked hard and everything, but sometimes you feel like you really are a conduit for describing an idea.”

When they landed on the topic of accolades, Rodgers asked Vernon about the Grammys. The Bon Iver mastermind has said some “gnarly things” about the awards before, but said he’d “take them back just because why have trouble with something that’s so simple? Just don’t participate if you don’t want to participate. But I do find it distracting.” Speaking specifically about his experience at the 2012 Grammys, where he won Best New Artist and Best Alternative Album for Bon Iver, Bon Iver, Vernon recounted,

“I was uncomfortable in that place because I wasn’t sure people had the same feelings that I did. I thought to myself, ‘I’ll take a stab at seeing how this feels.’ I didn’t feel comfortable. When it was done, I just walked out. No one recognized me. I was just in the Staples Center, it’s not like I was brought out some secret passageway. I was just there. Nobody remembered me; I was up in front of everybody. The whole thing was just odd… It’s just not in my mind. It’s not something that’s a part of the goal structure.”

Elsewhere in the conversation, the duo revealed their favorite football movies (Remember the Titans for Vernon, Varsity Blues for Rodgers), talked about staying in their professions until they’re old (Rodgers wants to play until he’s 40), and pre-show rituals (a Miller Light or a ginger-whiskey followed by a walk for Vernon, breathing exercises for Rodgers). Watch the whole thing below.