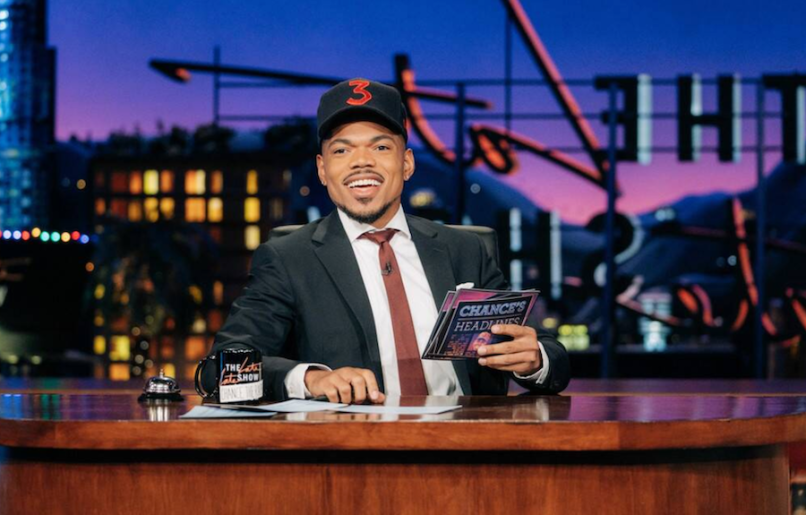 With James Corden out on holiday, a number of celebrity guests have been filling in as host of The Late Late Show. Last week saw talents like Alicia Keys and Harry Styles take over the talk show, and on Monday night, it was Chance the Rapper’s turn to pick up the cue cards and slip on the fake British accent.

Well, he didn’t actually need to do the latter, but he gave it a crack during the opening monologue. He also made jokes about Chicago weather and Popeye’s chicken sandwich while decking out the control room crew in his iconic 3 hats.


Once he got behind the desk, Chance took it upon himself to give some news headlines a more positive bend. That included changing a story about his recently canceled tour to say that instead of focusing on his family, he’d be starting a new career as a late night host. For his on-the-street bit, Host the Rapper (his words) tried to get people — including Santa — to cry on cue for $100.

Chance was then joined by guests Lil Nas X, Taraji P. Henson, and his own brother, Taylor Bennett, for a round of Christmas-themed Nuzzle Whaaa? The first two had to rub their faces on a gingerbread house, but watching the Bennett brothers nuzzle up against a real live Santa was the easy highlight. All four took part in the final round, and even though Henson got it right, she wasn’t a fan of the animal standing before her when the blindfolds came off.

After the games were done, Lil Nas X and Henson joined Chance on the couch for an interview. Much of the chat was spent praising the “Old Town Road” rapper for his meteoric 2019, including his clutch of Grammy nominations and his viral hit reaching Diamond status. They also touched on the time Henson hit on Lil Nas’ dad at the BET Awards, and the actress gave the young MC advice on waiting to post your whereabouts on social media.

Finally, Chance and Taylor teamed up for a performance of their The Big Day collaboration, “Roo”. The brotherly duo sat underneath a curtain of falling flowers to deliver the emotionally charged song while home movies from their childhood played behind them.

Watch all the footage below.

Though Chance’s tour is officially no more, he’s still set to appear at Pharrell’s Something in the Water Festival next April in Virginia. Tickets are available here. Lil Nas X also has an April fest on the docket, with a scheduled spot at Stagecoach in Indio, California. Find tickets for that event here.