A noted scholar, she talked to him about "art, music, and life" 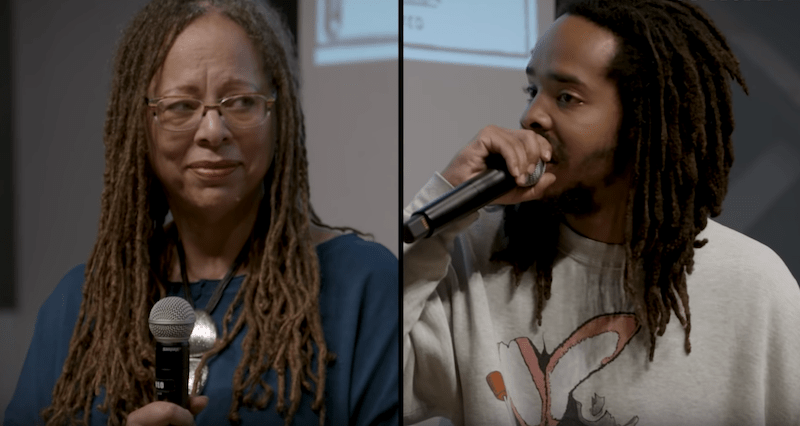 Cheryl I. Harris and Earl Sweatshirt

Earl Sweatshirt has shared a video interview of a candid one-on-one conversation with his mother, noted scholar Professor Cheryl I. Harris, filmed at the Museum of Contemporary Art in Los Angeles. Watch it below.

The interview, titled “In/between us: a conversation on art, music, and life”, sees the two going deep into their relationship as well as the world around them. Earl, whose real name is Thebe Kgositsile, went into the conversation with his mother feeling “incredibly nervous”. “There’s been a whole bunch of conversations involved with my mom and about my mom this year that she ain’t got to be a part of, so I’d like for her to talk for herself,” he told UPROXX reporter Jasmin Leigh before taking the stage with his mom. “It was already a public thing so it’s got to wrap up as a public thing.”


Once onstage with his mom, Thebe began a very public conversation in front of 650 fans (with hundreds outside waiting in line to get in). The two spoke about race relations, public education, childhood stories, and what inspired him when making Feet of Clay, his follow-up record to 2018’s Some Rap Songs. It’s essentially the type of laid-back Earl Sweatshirt interview fans crave.

There’s a lot of love between them onstage, but the sweetest moment comes near the end when his mom decides to share a little-known fact about the rapper: he’s an incredible comedian. “One of the things that my partner and I remember from when he was young is that he would grab onto whatever tape or CD he could find of any comic and just dig into it. We’re talking about from the time he was six or seven, and he would grab stuff like Richard Pryor,” says Harris. “Then he had a buddy and they got into Monty Python. That was a real period, that was a real thing. You knew it had to happen. But I say all of that to say that maybe one day Earl will do an album of comedy.”

There’s no more Earl Sweatshirt shows left in 2019, but he will be hitting the road again once the new year starts. Grab tickets to all of his upcoming concerts here.

Previous Story
Film Review: The Two Popes Is A Blessing of a Buddy Comedy
Next Story
Robert De Niro Dreams of Hitting Donald Trump in the Face with “a Bag of Shit”
Popular
More Stories
[fu-upload-form form_layout="media" title="Submit Your Photo"][input type="hidden" name="ugc" value="1"][/fu-upload-form]