The pop singer serves as the episode's guest host 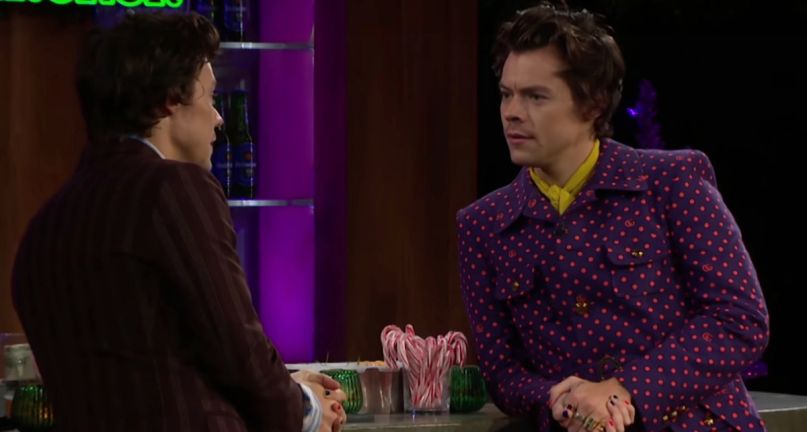 Harry Styles had an eventful Tuesday night on the Late Late Show with James Corden. The pop star served as his own episode’s guest host, which means he interviewed himself, played a game with Kendall Jenner, performed “Adore You”, chatted with Tracee Ellis Ross, and even carpooled with Corden himself… to work. Watch it below.

The interview portions of his late-night episode were as funny as they were revealing. While chatting with himself (thanks to some well-timed digital trickery), Styles complimented himself on his bold outfit choice and his new album, Fine Line. Later, he chatted with Kendall Jenner about her obsession with One Direction when she was younger. Turns out, she even went so far as to make a fan poster by hand. From there, Tracee Ellis Ross joined them and the three talked about modeling, defensive aircrafts, and befriending one another over social media.


Perhaps the most revealing moment of his episode was a game of Spill Your Guts with Jenner — essentially a game of truth or dare where the dare is eating pre-selected “foods” like giant water scorpion, cod sperm, and bull penis. During it, he grilled her on which celebs have slid into her DMs and how she would rank her family members, and she asked him to rank his former bandmates’ solo albums. Spoiler alert: they both eat a lot of gross things.

Later, Styles took the stage as the episode’s musical guest. Surrounded by crashing waves and a cutout boat, he and a backing band danced their way through the recently released “Adore You”. It’s a low-key funk number, and Styles belted it out, never missing a note. Maybe it’s because of his suit or the way he moved during the song’s instrumental interlude, but he gives off some major Bowie vibes during the performance.

Styles had other noteworthy moments hosting the show, including a monologue about the articles of impeachment and singing “Watermelon Sugar” while carpooling to work with Corden. Watch replays of everything below.

Next year, Styles will embark on a massive world tour. Grab tickets to all of his upcoming shows here.