Plus, she sits down for an interview about her Christmas special and finding fame 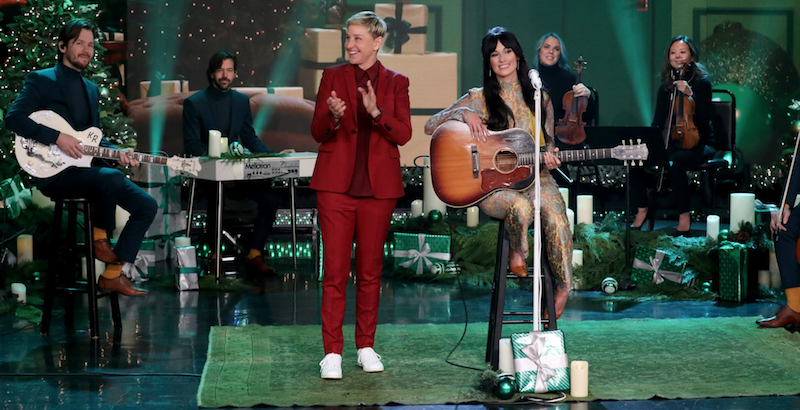 Kacey Musgraves stopped by Ellen on Tuesday to perform her holiday song “Christmas Makes Me Cry”. Beforehand, she sat down for a talk with DeGeneres herself about a range of subjects, including her new Christmas special. Replay both moments below.

“Christmas Makes Me Cry” is an original tune from Musgraves’ 2016 record A Very Kacey Christmas. To perform it on Ellen, she broke out her acoustic guitar and sang gently before several lit Christmas trees and her backing string players. All things considered, it was a pretty lush and intimate performance for a major daytime TV performance.


During the interview portion of her visit, Musgraves was asked why it took a while for fame to finally catch up with her, specifically in regards to Golden Hour. “These songs came at a time when we all needed a bit of an escape from the chaos of the political world, the social world, and I wanted the record to be a hiding place from that,” she said.

Later, she talked about how she and her sister helped give Tom’s One Hour Photo Studio & Lab, a one-man photo shop in Los Angeles, a boost by making him an Instagram account. It’s a cute story that will warm your heart just in time for the holidays.

During the end of her Ellen visit, Musgraves discussed The Kacey Musgraves Christmas Show and its star-studded soundtrack, which features Lana Del Rey, Camila Cabello, and Zooey Deschanel. On it, Musgraves and company combine country and pop as they work their way through holiday classics. There are also a handful of originals, like “Glittery” with Troye Sivan, which Musgraves debuted solo on Fallon recently.

The seasonal cheer doesn’t stop here. Musgraves has plenty of holiday concerts on her docket, followed by festival stops in the new year at Lollapalooza Chile, Lollapalooza Argentina, Lollapalooza Brasil, and Intersect Las Vegas. Grab tickets to all of her upcoming concerts here.