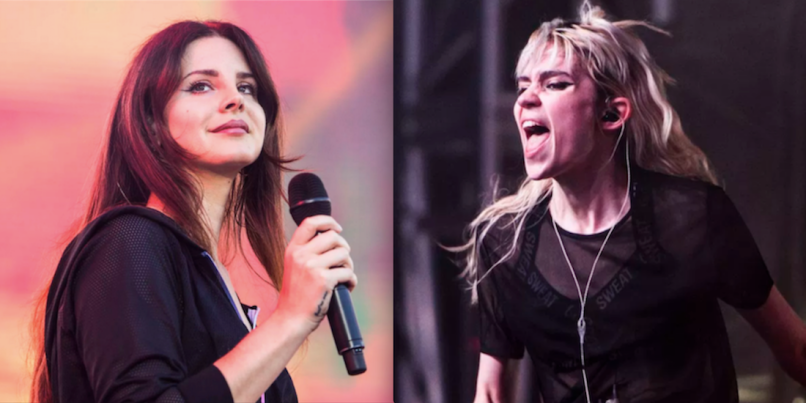 For a new feature in Interview Magazine, Lana Del Rey sat down with Grimes to talk about her upcoming album, the internet, and “outrage culture.” The discussion is as ripe with notable quotes and discussion-worthy interactions as you would expect — including an interesting Jeffrey Epstein theory.

This isn’t the first time the two pop stars have interacted. They toured together back in 2015, so they’re already well acquainted with one another — but circumstances have changed quite a bit for both of them in the last four years. In the interview, they catch up on all of their latest happenings, including Del Rey’s excellent album Norman Fucking Rockwell!, Grimes’ upcoming record Miss_Anthrop0cene, and all the ways “outrage culture” feeds into their careers.


When asked if the songs on her new album “are more personal” or have “the overculture weighing on them,” Grimes responded by saying she’s “obsessed” with polytheism. “I love how the ancient Greeks or the ancient Egyptians lived in this weird anime world where there were just tons of gods that could be anything,” said Grimes. “It’s like every form of suffering had a representation.” She added that religions is “like the best science fiction.” Decide for yourself how prevalent those themes are when revisiting her recent singles “Violence”, “My Name is Dark”, and “So Heavy I Fell Through the Earth”.

“There will eventually be a sentient technology that… can make anyone do whatever it wants, Jeffrey Epstein-style. My theory on Epstein is that he had tapes of people with underage girls, and that’s how he was getting all this stuff from all these people. Someone gave him a house and a plane. It’s like, ‘What the fuck?’ It reeks of deep blackmail to me. If you have everybody’s stuff, you can control the world. It seems a lot easier than a violent takeover. If I’m an AI, do I hold everyone hostage with nuclear bombs, or do I just blackmail everyone? Killing a lot of people seems hard.”

All of this nonsense almost makes it hard to remember the previous releases that made Del Rey and Grimes famous. Thankfully, those still hold up, which is why they appeared on our lists of the Top 100 Albums, Top 100 Songs, Top 25 Pop Albums, and Top 25 Pop Songs of the decade — even if Grimes thinks Art Angels is a “piece of crap”.

Luckily, you can still catch Del Rey perform her newest Rockwell songs live on tour. Grab tickets to all of her upcoming concerts here.