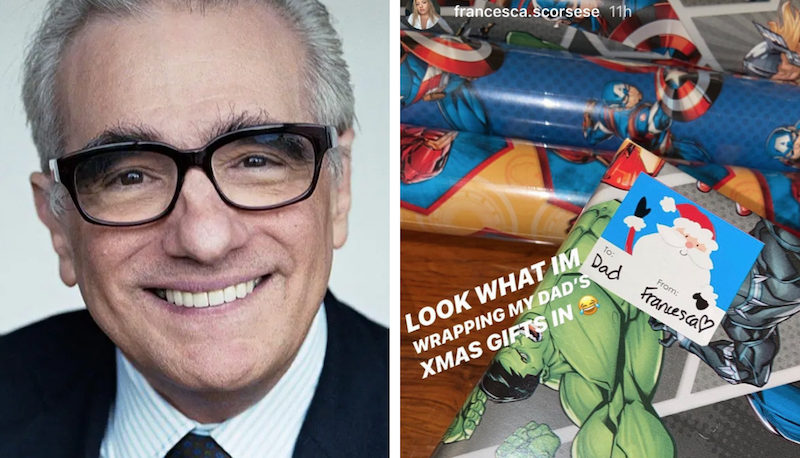 Martin Scorsese sparked a fierce debate this fall when he refused to characterize Marvel movies as “cinema”. Instead, the renowned director opted to describe them as “theme parks” that shouldn’t be allowed to “invade” theaters.

Scorsese later clarified his comments following backlash from fans as well as notable industry folk like James Gunn, but still maintained the overall opinion that Marvel movies represented something inferior to his own narrative film work. “Many of the elements that define cinema as I know it are there in Marvel pictures. What’s not there is revelation, mystery or genuine emotional danger,” he wrote in a New York Times op-ed piece last month. “Nothing is at risk.”

While Scorsese is obviously quite serious about his hot take, his daughter decided to have a little fun with it. Francesca Scorsese trolled her 77-year-old father by wrapping his Christmas gifts in Marvel-themed paper.

(Read: “Do You Like Superhero Movies?” In Defense of Scorsese, Coppola, and Original Filmmaking)

“Look at what I’m wrapping my Dad’s X-mas gifts in,” Francesca wrote in an Instagram Story, accompanied by a laughing emoji and a picture of her purposely chosen gift wrap covered in images of the Hulk and Captain America.

Francesca hasn’t uploaded any updates since, so we aren’t sure how well her father received the cheeky presents. But if there ever was a time to get in a friendly family jab, it’d probably be during this holiday season.

Scorsese’s impressive The Irishman is out and currently streaming on Netflix, and it’s worth seeing just for that one scene alone.