Matthew McConaughey is a threatening marijuana kingpin in new trailer for Guy Ritchie’s The Gentlemen: Watch 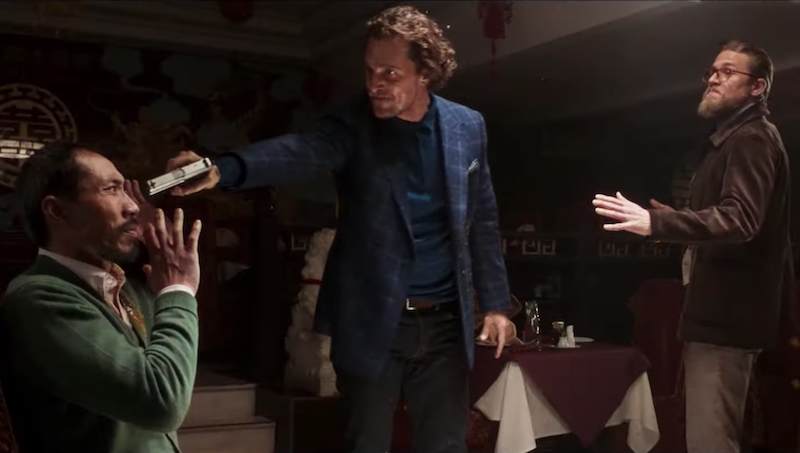 Guy Ritchie’s upcoming movie The Gentlemen has a new trailer that makes Matthew McConaughey look tougher than ever before. In the clip, McConaughey threatens to shoot anyone who comes after his weed industry or his mob-like crew. As to be expected, everyone scrambles to do his bidding. Watch the trailer ahead.

The Gentlemen is a crime comedy about a weed kingpin (McConaughey) who’s trying to prevent a group of villains from robbing his business. The recently-tapped University of Texas professor stars alongside a stellar cast: Hugh Grant, Henry Golding, Charlie Hunnam, Michelle Dockery, Jeremy Strong, Eddie Marsan, and Colin Farrell. Richie wrote and directed the film, and we got a first look at what to expect back in October.

In the latest tongue-in-cheek preview, the plot of The Gentlemen is summed up with a threatening monologue from McConaughey’s Mickey Pearson. “There once was a young and foolish dragon who came to ask a wise and cunning lion about acquiring his territory,” he says. “Now the lion, he wasn’t interested, so he told the little dragon to [fuck off]. The dragon, he persisted. He started a war. So the lion took the little dragon for a walk and put five bullets in his little dragon head. There’s a message in there, maybe you can explain it to me.”

(Read: The 10 Most Shocking Mob Hits in Film History)

The response from Golding’s character? “The young succeed the old.” It’s a swift response that’s as cocky as it needs to be for a Guy Ritchie film.

The Gentlemen follows Ritchie’s 2019 live-action remake of Disney’s Aladdin, but if it’s anything like Ritchie’s other crime-adjacent movies, aka Sherlock Holmes and Snatch, audiences are in store for a witty, wild, and reckless flick. The Gentlemen hits theaters on January 24th, and you can check out the full trailer now.