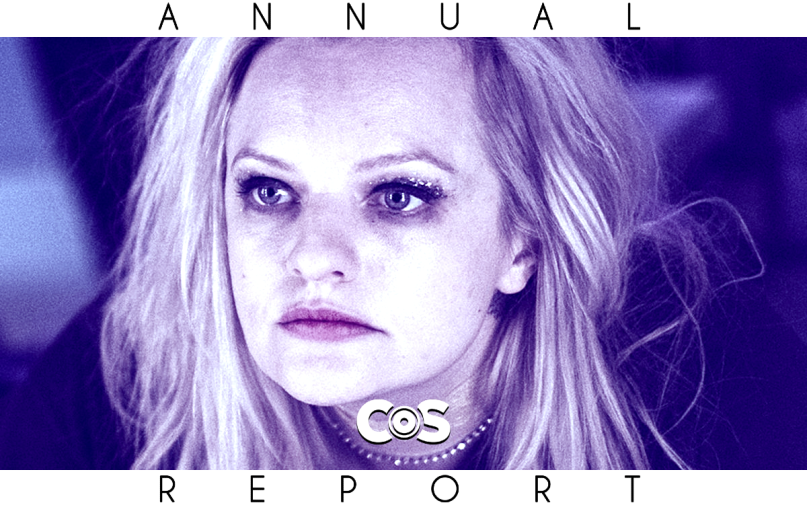 It’s been a year for great performances on film—every year is, of course, but 2019 feels special. This is total speculation, but perhaps because so many artists have a lot of rage to burn at the moment. Perhaps there’s something about the last few years that makes it the exact right time to run headlong toward a cliff, as the magnificent Adèle Haenel does in Portrait of a Lady on Fire, or to stare, skitter, and hiss, as Lupita Nyong’o does in Us, or to feel the full weight of even the smallest of victories, as Leonardo DiCaprio does in Once Upon A Time… In Hollywood. There’s boldness aplenty, as Florence Pugh shows in Midsommar, and no shortage of smart, subtle, endlessly layered acting, as Pugh shows in Little Women. And then there’s Elisabeth Moss in Her Smell. She does all of those things, literally and metaphorically, and sometimes both at once.

As Her Smell’s Becky Something—a fire-bright punk rocker burning up from the inside, set alight by her own jet fuel—Moss sneers and howls, smiles and sings, grins monstrously and doles out tiny nods containing infinite warmth and sincerity. She’s the monster under the bed, crawling out covered in glass and spit and ashes; she’s also a woman in a white room, singing a Bryan Adams song with such tenderness you might think it was a farewell—and it might be, in fact. The third of Moss’ collaborations with writer-director Alex Ross Perry, Her Smell is a towering, unforgettable experience, and Moss’ performance is the high-wire act that makes it all work. One step to the left or the right and it could all go horribly wrong, but whether she’s smashing bottles or whispering about dreams, Moss’ steps could not be more sure.

“My God, do I want to see this,” Perry told Consequence of Sound he felt as he was writing it. “My God, do I want to see this performer playing the character, I cannot write this fast enough, I cannot get it into her hands fast enough, and we cannot shoot it fast enough.” Needless to say, it was all he imagined. Below, we spoke with Perry about Moss’ performance of the year, the alchemy of their collaboration, and when (and if) we can expect to see one of the world’s great performers step alongside him into the Stephen King universe.

On how Becky Something came to be

Her Smell (Gunpowder and Sky)

Which came first, Becky or Elisabeth? Were the two already linked when you started writing?

Yeah, certainly [they were linked]. Part of that is just that it’s our third movie together, and I had sort of softly promised that this was a character and a thing that I would create for her. And it was very specific—here’s the thing, here’s what I want to do, here’s how I kind of see the character. As opposed to Queen of Earth, our second movie together where I said, “Hey, I wrote this thing, take a look at it, I think it could be really great,” this was, “I’m going to write this character for you, put it in the bank that these scenes are your scenes. These moments are only in my mind as something I can see you doing, and I’m just going to work on that until I’ve finished it, and then I’ll send it.” So it was as extreme [an example] of writing for a performer as anything could be, aside from sitting in a room and doing it alongside them.

You’ve said that, as the two of you were leaving the soundstage after her first band rehearsal, you told her, “I’m really curious to finally see what Becky is like.” And she said, “Me too.”

It’s not like the other movies that I’ve made, even the others that we made together. [Becky is] so huge and extreme of a character that there really was a deep sense of uncertainty and excitement to see this character in action, because she’s one of the most hugely extreme characters you could conceive of, on the page. Therefore, there’s a very fine line between how this does or does not get executed.

I can only compare her in my mind to something like Daniel Plainview in There Will Be Blood. I just wanted the character and the performance to be the sort of thing that you can’t even imagine existing, let alone as a thing that is being done in front of a crew with a camera and “action” and “cut.” When you watch it, you’re just like, “How does the character even exist in the context of what I know about filmmaking and film acting?”

Looking at Plainview, or characters of that size and scope, that was kinda the hope, that that’s what we would unlock. Therefore, it needed to remain a mystery until the day we started filming because, otherwise, it wouldn’t be a mystery when you watch the movie.

On building the performance, one act and choice at a time

You’ve described Moss’s performance as both impulsive and meticulous. How do those two things work together?

What’s meticulous about her performance is its relationship to what’s on the page. It’s all completely scripted dialogue. No matter how nonsensical the words out of her mouth seem, or how stream-of-consciousness everything is, it was written exactly as you see it in the finished cut of the movie. There’s a meticulous quality to that on a technical level. And then the other meticulous thing was the fact that, unlike any other performance in almost any other movie, she has to meticulously track what happens to the character over the span of the next 20 minutes—and do that five times [once for each of the film’s five acts]—rather than normal screen acting, where you’re tracking the four minutes of the scene.

And then the spontaneous piece of it is every other thing, other than what touches the dialogue … is up for grabs. Any prop can be taken, any actor, you could get an inch away from their face or yell at them from across the room. All of that stuff was kind of to-be-determined. The performance needed all [of the technical precision] to be what it could be, but then it also needed a lot of room for chaos.

So, she built each of these arcs brick by brick. Was the same true of the arc of the film? Were you able to shoot those in order?

No, each of the five acts was filmed in its own chronology, but the five acts were filmed in the order of 1-5-3-2-4, a completely arbitrary order based on the realities [of the situation]. The fact that we could shoot 25 pages chronologically, five times in a row, was kind of a miracle. But shooting 140 pages chronologically would be completely out of the question, even for movies that don’t start and end in the same location—so one and five needed to be done at the same time.

Was there a moment when you were watching the performance and thought, Yep, that’s it, she found it?

I don’t remember there being like a lightning bolt during the filming of act one, because of the cumulative effect of how the movie was shot. We were doing these long takes knowing that … we’re not trying to make it seem like this all one take, it’s going to be editing on top of editing, hundreds of cuts, left, right and center. If there was a moment, it was when we pressed play on the first cut of act one in the editing room at the end of the first week of editing. That was a moment of like, “Oh my God, this worked.” For all of the focused intensity and the insanity of the performance, and just the energy on set, it was like, “If this movie—the character and the entire thing—are not balanced perfectly in the editing, then the energy that we tried to create does not exist in the movie that people watch.” It certainly seemed like it was working on set, but there was never a sigh of relief.