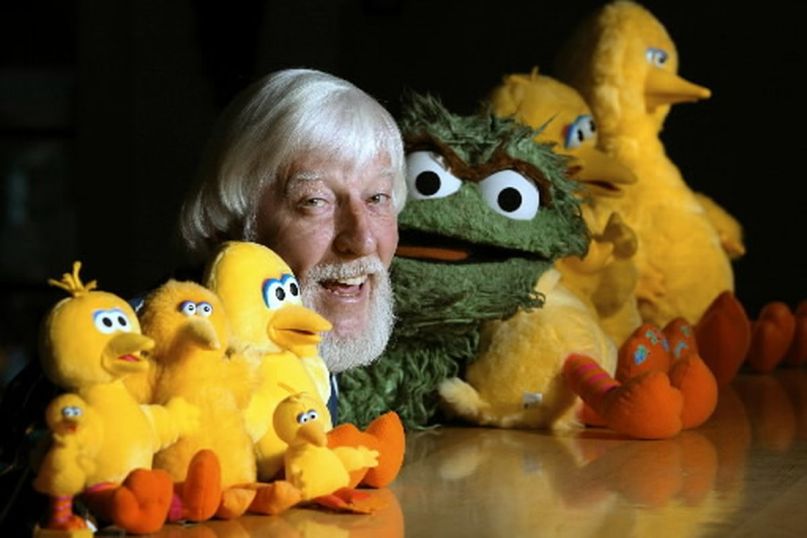 Music, Movies & Moods is a free-form column in which Matt Melis explores the cracks between where art and daily life meet. Today, he fondly remembers Caroll Spinney and some of our favorite friends from Sesame Street.

Caroll Spinney may not be a household name. But ask any child or parent who has sat down to watch Sesame Street during the last 50 years – which includes audiences in more than 120 countries worldwide — and they’ll most likely be intimately familiar with Spinney’s work. That’s because for nearly five decades, the mop-topped puppeteer had been the performer, heart, and soul behind two of television’s most beloved characters: Big Bird, a childlike 8’2” yellow canary, and Oscar the Grouch, a garbage can-dwelling doom-and-gloom shag pile of green fur.

It’s a Muppeteer’s lot to be famous without being recognizable. Apart from the late Jim Henson himself, whose bearded visage has become as much a logo for The Muppets as his famous frog alter ego, most Muppeteers can walk down the street without being noticed. That’s because while their characters are seen by millions, the performers themselves are usually operating them from just off-camera. In Spinney’s case, much of the last 50 years was spent hunched beneath Oscar’s trashcan or donning a pair of orange and pink-ringed canary legs and a fully plumed yellow body suit as he stretched one hand high over his head to operate Big Bird’s head and mouth while watching his performance in a built-in monitor below.

I don’t even want to think about the physical toll of maintaining an eight-foot canary’s posture for the better part of five decades. I do, however, want to take a few moments to look back, as I imagine most of you have done since hearing about Spinney’s passing this weekend at the age of 85. Because what are we if not memories … and maybe some molting. Filmmaker and longtime Henson partner Frank Oz has on countless occasions derided critics for reducing Muppeteering to mere voice work. Oz believes that each performer instills an essence, something of him or herself, within a character. In that case, we might understand something more about Spinney by remembering our largest and grumpiest childhood friends.

Big Bird acts as Sesame Street’s everychild, a perpetually six-year-old towering canary (sometimes even more so on roller skates) that children can relate to because, after all, size isn’t everything when trying to make sense of this world at such a young age. It’s an age where basic questions return puzzling answers, where a teddy bear named Radar might be the ally a bird needs, where a birdseed milkshake can make most things better, or where an imaginary (or was he?) friend like Mr. Snuffleupagus might be in order. Big Bird’s a character full of childlike wonder that Spinney kept genuine for nearly half a century, as capable as ever in his golden years of tapping into and reminding us of childhood’s curiosities, worries, and fears.

That type of emotional honesty allowed Sesame Street to use Big Bird to address serious matters. When actor Will Lee, who played the elderly shopkeeper Mr. Hooper (“Mr. Looper,” as Big Bird pronounced it), passed away in December 1982, the show’s creative team decided to use the opportunity to help young children cope with the idea of death. In the episode, Big Bird stops by to deliver caricatures of all his adult friends on Sesame Street, including one for Mr. Hooper. “Well, I’ll give it to him when he comes back,” Big Bird tells the others. It’s not until Susan explains that dead people don’t come back and that we have to rely on our memories of them to get through that Big Bird begins to comprehend the finality of the situation. It’s a groundbreaking moment in television history, and, from my own experience, a scene that helped me handle the loss of a grandparent as a young child.

Another one of Spinney’s more triumphant performances came when Big Bird starred in his own movie, 1985’s Follow That Bird. On its surface, the movie might appear like a lucrative excuse to get the familiar gang off Sesame Street and out into the world, but a lot more is going on here. The stalking, nightmare-inducing Miss Finch convinces Big Bird that he’d be happier with his own kind — birds, and, in this case, an actual family of dodos — than with his friends on Sesame Street. Of course, Big learns that families come in all shapes and sizes and species, a lesson central to heart of the show from its inception. Again, from deep beneath all that foam and feathers, Spinney brings forth the sensibilities of a young child, scared, lonely, and unsure of where he belongs in the world.

Of course, Spinney could play naughty, too.

Not quite as iconic as Big Bird, but no less beloved, Spinney’s Oscar the Grouch remains one of the show’s most critical characters. Oscar takes the cynical point of view of life as a grouch. Despite his constant insults, particularly always referring to Big Bird as a turkey, our feathered friend can’t help but see through to the tenderness buried beneath Oscar’s grumpy personality. Spinney, of course, plays both parts in this ongoing teasing, usually to comic effect, but Oscar serves as such a powerful reminder of how different we all are, that there can be good in anybody’s heart, and that we have to be able to make room for everybody. It’s a message we understand even as Oscar hurls insults that go way over Big Bird’s innocent noggin.

In May 1990, Spinney, like so many Muppeteers, performed at the public memorial for Jim Henson at Manhattan’s Cathedral of St. John the Divine. He played Oscar the Grouch among a swaying stage of puppets and performers during “Just One Person”, the finale to a medley of Henson’s favorite songs. But the most touching tribute had already been delivered earlier in the program when a saddened Big Bird solemnly waddled to the stage wearing a Kermit-green bow tie and sang “Bein’ Green”, one of Kermit the Frog’s signature songs. When done, Big Bird tearfully looks to the cathedral’s rafters and says, “Thank you, Kermit.” Using the name of Jim Henson’s character rather than Jim’s own name always struck me as odd. It could easily be chalked up to Kermit being Big Bird’s friend on Sesame Street, but now I think it meant something more. Perhaps it was Spinney’s way of acknowledging that Henson’s most enduring gift might, in fact, be a character, one that can live on and continue to, as Kermit pondered in The Muppet Movie, make millions of people happy, especially children.

Spinney was in position to leave the same type of gift behind.

I can’t imagine having to explain to a child that Big Bird’s dead. Better to lie and say he flew south for the winter. Luckily, Muppeteer Matt Vogel, mentored by Spinney in recent years, will continue to carry on the man’s life’s work in feathers for the foreseeable future. Most children will never even notice a change in their giant, yellow friend, and that’s as it should be. After all, Spinney learned long ago that you’ll never be the talk of the room when an 8’2” canary in roller skates glides through the door.