In other news, she's set to play Glastonbury 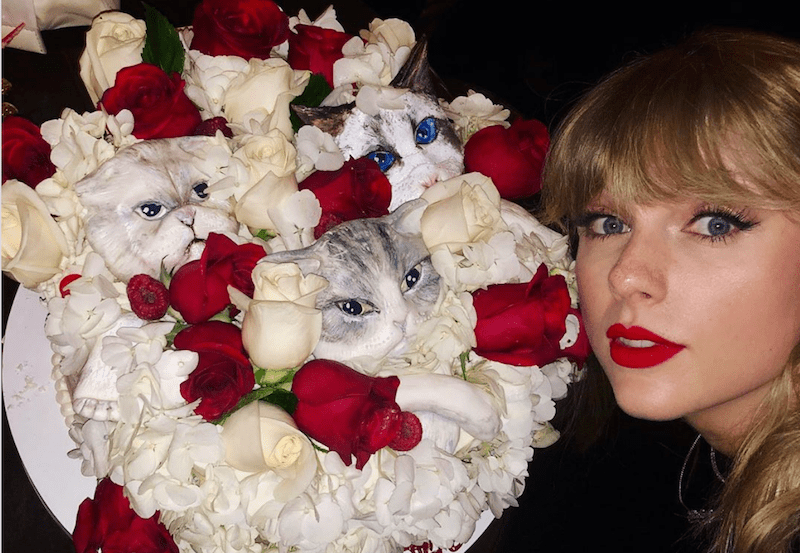 Taylor Swift rang in her 30th birthday with the exciting news that she’ll be headlining Glastonbury in 2020. To celebrate, she was treated to a birthday cake with her cats’ faces on it… but the finished look was way creepier than it was cute.

As a matter of fact, Swift received not one but two unnerving cat cakes for her birthday. The first arrived after she finished performing at iHeartRadio’s 2019 Jingle Ball. The event’s host presented her with a giant, three-tiered, cat-covered birthday cake drenched in purple icing. While the crowd at Madison Square Garden sang “Happy Birthday”, Swift looked at the cake, likely inspecting how accurate the cat faces were as representations of her own pets: Benjamin Button, Olivia Benson, and Meredith Grey.


But the so-called real cat cake hit social media on Saturday morning, and it was truly a sight to see. Adorned with red and white roses, the small cake shows three cats crawling (yes, with their little claws) out of the cake. All of them look deeply upset and way, way, way too realistic. “Fur real guys this was my cake,” Swift said in the Instagram post, seemingly unfazed.

Afterwards, Swift posted several other photos from what seems to be a Christmas party. A handful of celebrities were there, including Jack Antonoff, Ryan Reynolds, Blake Lively, Gigi Hadid, Jonathan Van Ness, Antoni Porowski, and more. Unfortunately, none of them seem to be eating (or frowning over) the cat cake in the photos.

As previously noted, Swift was announced as the Sunday night headliner of Glastonbury. It’s a stacked lineup already, as she’s joining previously announced headliners Paul McCartney and Diana Ross. Surprisingly, it marks Swift’s first time ever (!) playing the festival. Before that, she will be busy touring Europe and performing at other music festivals like Open’er Festival, NOS Alive, Mad Cool, and Roskilde Festival. Grab tickets to all of her upcoming concerts here.

Fur real guys this was my cake 🎂

Happy birthday but make it santa 🎅

Honestly spending my 30th with the fans who have made my life what it is at jingle ball, then throwing the most aggressive holiday party known to womankind… I just.. seriously feel so lucky for you all and will spend forever trying to find ways to say thank you. *cries in Christmas tree*

Previous Story
Kanye West and Joel Osteen are planning to go on tour together
Next Story
Filmmaker of the Year Quentin Tarantino on Finding the Right Story, What Streaming is Missing, and His 10th Film
Popular
More Stories
[fu-upload-form form_layout="media" title="Submit Your Photo"][input type="hidden" name="ugc" value="1"][/fu-upload-form]