A year filled with highly anticipated releases lived up to the hype, and then some 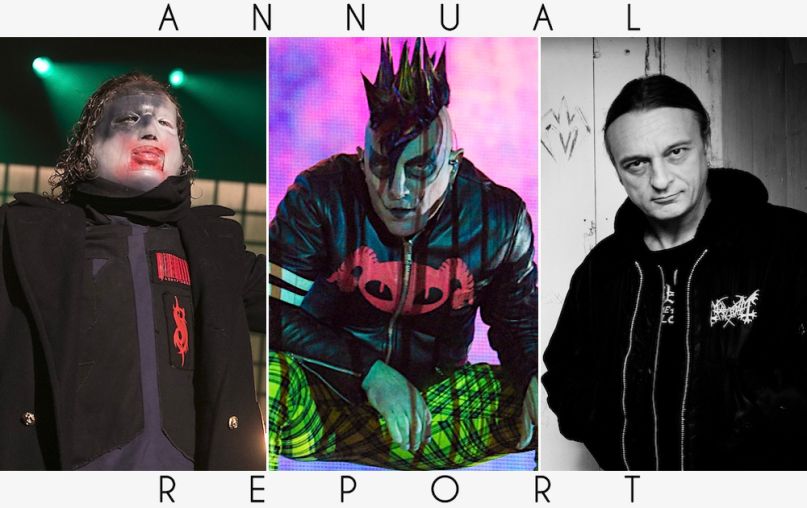 Heavy music had another banner year in 2019, with some highly anticipated releases living up to the hype, and rising acts continuing to make their mark.

No album was more anticipated than Tool’s Fear Inoculum, which marked the progressive metal band’s first LP in 13 years. The disc proved to be worth the wait, earning high praise from critics and fans alike. Meanwhile, other major acts like Rammstein, Slipknot, Korn, Killswitch Engage, and Dream Theater also released stellar albums in 2019.

Black metal was well represented with epic albums from Mayhem and Darkthrone, among others, while punk and hardcore saw strong efforts from Refused, The Damned Things, Knocked Loose, and more.

Elsewhere, acts like Blood Incantation, Tomb Mold, and Lingua Ignota emerged from the underground to break through in 2019.

The strong output from heavy music acts this year made it difficult to narrow down the best of the year. With nearly 100 LPs suggested by our writing staff, and a few heated arguments, we here at Heavy Consequence finally came up with our picks for the Top 30 Metal + Hard Rock Albums of 2019. Dive in below.

The Gist: Over the course of their career, Carnifex have pushed their craft to deliver devastating material that’s brimming with haunting flair and poeticism. Their 2016 LP, Slow Death, was a strong success and further elevated their artistry. The San Diego deathcore band’s seventh studio LP, World War X makes for another worthy addition to their discography.

Why It Rules: Carnifex are all about brutal presentation; each release of theirs promises all-out adrenaline and heaviness. The opening title track plays out in typical Carnifex fashion — unleashing a blend of crunchy and melodic guitar playing, blast beats, and growling vocals, helping to establish the album’s overall atmosphere. Overall, World War X is an absolute rush. The band’s ability to blend feeling and raw heaviness once again allows them to release a work of awesome brutality. With World War X, Carnifex continue to prove themselves as one of deathcore’s leading acts. — Michael Pementel

Essential Tracks: “Visions of the End”, “Eyes of the Executioner”, “All Roads Lead to Hell”

The Gist: After a series of well-received demos and an even more beloved debut record, Canadian death metal duo Tomb Mold expanded into a full band and, less than a year later, returned with Planetary Clairvoyance, a concise, groove-oriented slab of sci-fi themed old-school death metal indebted to the genre’s eccentric Finnish roots.

The Gist: On paper, the combination of Anthrax-style thrash metal with Fall Out Boy’s brand of pop-punk looks as mismatched as an orange juice and anchovy smoothie.  We never find out what that shake would taste like, though, as The Damned Things — Anthrax guitarist Scott Ian, Fall Out Boy’s Joe Trohman and Andy Hurley, Every Time I Die’s Keith Buckley, and Alkaline Trio bassist Dan Andriano — pursue a less predictable course on High Crimes.

Why It Rules: Scott Ian is no stranger to the power of the riff. In The Damned Things, he and Joe Trohman find common ground in their shared love for classic rock acts like Thin Lizzy but then expand their reach from there. Buckley follows their lead, showing more range than he normally gets to display, as the space and dynamics in the music give his lyrical wit room to shine more than ever before. Calling this outfit a “supergroup” is, for lack of a better word, a crime, as The Damned Things exist as a cohesive, captivating, and current hard-rock band. — Saby Reyes-Kulkarni

The Gist: With every album that Inter Arma have released, they have shown a deeper bag of tricks. The chameleon metal act consistently delivers crushing riffs and booming drums, but have yet to offer similarly sounding consecutive packages. When Inter Arma step behind the curtain of the studio, the only guarantee is that when they reemerge, the band will not quite sound the same as before

Why It Rules: Inter Arma do not present any shocking new elements to their sound on Sulphur English. Rather, this album finds the band creating a much darker dynamic and cohesive sound out of their previous sonic pursuits. Sulphur English is proof that they can execute most subgenres better than plenty of one-tracked bands. With Sulphur English, Inter Arma’s wizardry has never been executed more cleanly and effectively. — TJ Kliebhan

The Gist: During a career that started nearly 30 years ago, Exhumed have continuously brought joy to death metal fans. From their savage instrumentation to their horror-inspired lyricism, Exhumed proudly embrace all that is terrifying and sinister. The deathgrind band continues its passion for the gruesome and chilling on its ninth studio album, appropriately titled Horror.

Why It Rules: Horror is pure death metal and crossover insanity. Including three bonus tracks, the album contains 18 songs, and only one goes over the 3-minute mark. Horror has no warnings, it just goes full throttle. Horror easily makes for some of the best fun to be had in death metal this year. You won’t find anything overly technical or avant-garde, but Exhumed isn’t here for that; instead, they want to get your blood pumping. They want to send chills down your spine with thrilling instrumentation, creepy vocals, and gruesome lyrics. With Horror, Exhumed have crafted an incredible love letter to the horror genre. — Michael Pementel