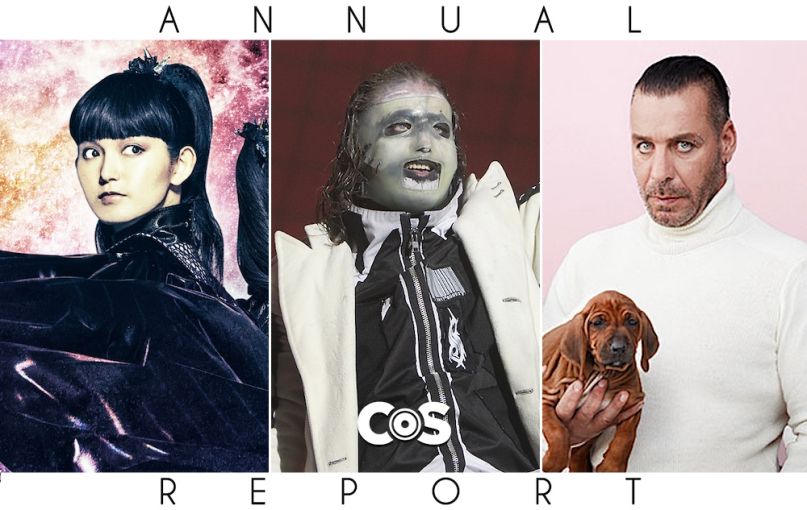 Earlier this year, a new study revealed that heavy metal was the fastest-growing genre in terms of streams and downloads from 2017 to 2018. It would be no surprise if that trend continued in 2019, another banner year for heavy music.

Metal and hard rock thrived once again this year, with a vast array of artists delivering stellar songs throughout 2019. The past 12 months have seen the return of bands like Tool and Rammstein, who had both been long dormant when it came to new music. Heavy hitters like Slipknot and Korn also came through with a number of strong tracks.

Black Sabbath legend Tony Iommi teamed up with Swedish doom veterans Candlemass for one of the year’s most memorable tracks, while fellow Sabbath icon Ozzy Osbourne overcame a tough year health-wise to deliver an impressive single from his upcoming solo album.

The year wasn’t all about long-established acts, though, as Devil Master, Gatecreeper, Monolord, and more proved that metal’s new crop of up-and-coming acts continue to prosper.

Sounds Like: Crushing psychedelic doom metal with riffs for days.

Key Lyric: “Illusions of a world/ Broken but yet so pure”

Why It Matters: Monolord have become a staple in the stoner metal scene for consistently delivering melodic riff fests like “The Bastard Son” — the 10-minute lead track from their Relapse Records debut, No Comfort. The catchy chorus melody and a signature riff make this one particularly memorable among the album’s many head-nodding jams. —Jon Hadusek

Key Lyric: “Seek the answer in expression/ Transformation will begin”

Why It Matters: Divided by Darkness is an open love letter to metal’s glorious past, and “Hear Her” is the finest example of Spirit Adrift’s tasteful anachronism, proving that a concise pop song structure can always accommodate chugging riffage and soaring vocals, no matter what decade it is.—Jon Hadusek

Sounds Like: Cruising through a desert expanse as the edible starts to kick in.

Why It Matters: Resting right under the surface of every great stoner rock band is a churning soup of psychedelic and prog influences. Like most, Elder often only reveals that element in small sips. On this stopgap between proper albums, the Boston band takes a big heaving gulp and recorded three extended jams that blissfully wander with no endgame in mind. The opening track on The Gold and Silver Sessions is nearly 10 minutes of third eye polishing that doesn’t resist the urge to get nasty and heavy. —Robert Ham

Key Lyric: “Serve in heaven or reign in hell/ Find your paradise lost/ Rise, awake or forever be/ Fallen in the abyss”

Why It Matters: Hammerfall deliver epic power metal with all the right thematic content: swords, castles, Satan, etc. “Dominion” is arguably the heaviest the prolific Swedish metallers have ever sounded, with a boisterous Motörhead-like aggression that’s befitting of the band. —Jon Hadusek

Sounds Like: Aggressively intelligent So Cal punk rock punching you in the face.

Key Lyric: “Threat is urgent! Existential!/ Omnipresent like a skin/ But the danger’s purely mental/ It’s chaos from within”

Why It Matters: Bad Religion are pissed off again and it shows. “Chaos From Within” off of Age of Unreason is quintessentially So Cal punk. It’s fast and in your face, but remarkably memorable. As a noticeable influence on so many younger bands, it’s awesome to hear the innovators themselves show the kids how it’s done on their 17th studio album. — Colette Claire