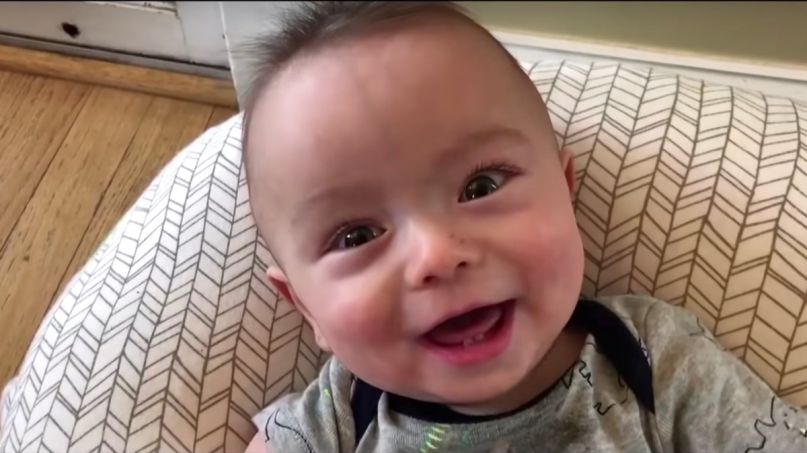 A determined dad and his harmonious baby teamed up for a cover of AC/DC’s “Thunderstuck” that needs to be seen to be believed.

The YouTube clip, titled “Baby Ryan ‘Sings’ Thunderstruck”, shows the infant boy “performing” the rock classic via various baby noises that his dad, Matt MacMillan, recorded and then pieced together. The result is a mesmerizing version of the 1990 hit.

That video is impressive enough, but an accompanying making-of clip really shines a light on how meticulous and indefatigable MacMillan was in constructing the creative cover.

As MacMillan explains, “I spent a year recording my son making all sorts of baby noises. After dumping the clips into a computer, I first pulled out all the sounds without a tone. And then manually sorted the remaining 83 clips by pitch. From there, I figured out the musical note of each clip.”

After arranging the clips to make the full song, MacMillan still needed drums, so he used Ryan’s sneeze for the cymbals, a sofa hit for the bass drum, and floor hit for the snare drum.

“Baby Ryan ‘Sings’ Thunderstuck” has roughly a quarter million views since being uploaded on January 14th. Check out the video, along with the making-of clip, below.

As for the real AC/DC, the past year and a half has seen unconfirmed reports that classic members Brian Johnson, Phil Rudd, and Cliff Williams have returned to the band. Recently, Australian radio personality Eddie McGuire said that an album and tour announcement were imminent.