Sam Springsteen will go into the fire as a member of the Jersey City Fire Department. 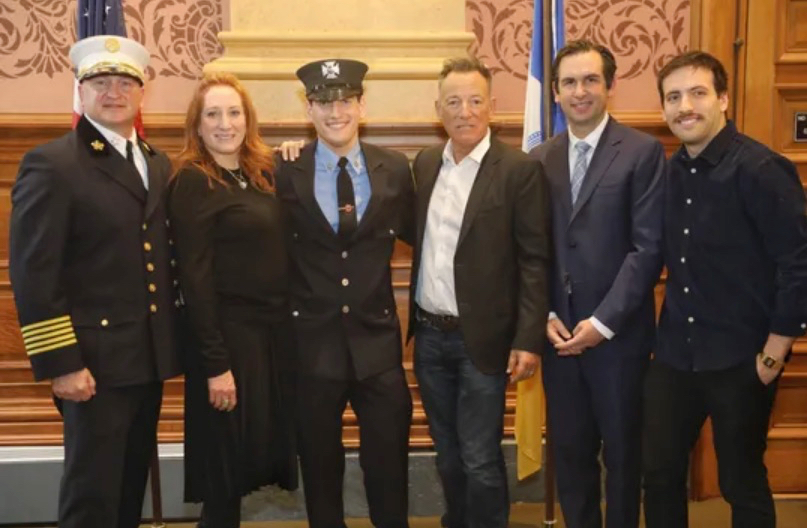 Bruce Springsteen’s youngest son, Sam, will go into the fire as a member of the Jersey City Fire Department.

The 25-year-old Springsteen was sworn in as the department’s newest member on Tuesday. A graduate of the Monmouth County Fire Academy in 2014, he previously worked for his hometown Colts Neck Fire Department, the Long Branch Fire Department, and the North Wildwood Fire Department, where he assisted in saving a fisherman who was stuck waist deep in the mud (via APP) Last summer, he joined the Jersey City Fire Department as a trainee, fulfilling a lifelong dream.

His father and mother, Bruce Springsteen and Patti Scialfa, were on hand for their son’s swearing-in. “You know I think he can handle himself really well,” the elder Springsteen responded when asked if he was concerned for his son’s safety. Meanwhile, Scialfa referred to Sam as “Our family hero.”

Springsteen and Scialfa’s other children are accomplished in their own right. Evan, 29, works for SiriusXM Radio and Jessica, 28, is a champion showjumper who has a good shot at making the Olympics.

As for their dad, he is *hopefully* putting the finishing touches on a new E Street Band album and pumping irons in preparation of a supporting tour.

A post shared by Patti Scialfa Springsteen (@officialrumbledoll) on Aug 1, 2019 at 10:33am PDT

A post shared by Patti Scialfa Springsteen (@officialrumbledoll) on Jan 15, 2014 at 7:45pm PST