BTS and Lil Nas X to perform together at 2020 Grammys: Report 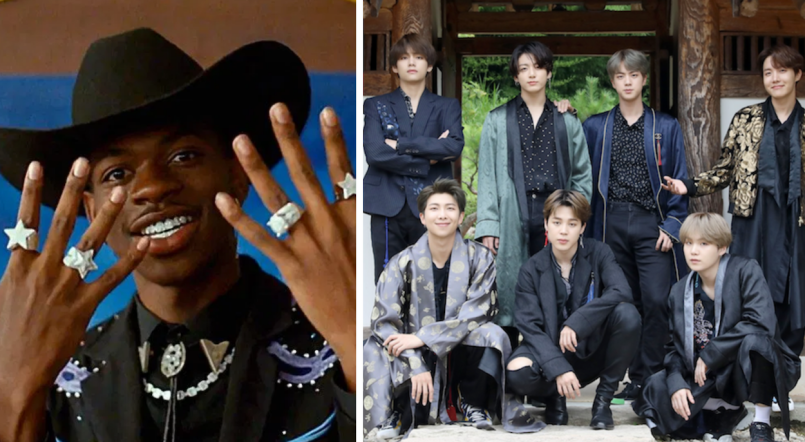 Now, as Variety reports, Lil Nas X will also take the stage to present a special “Old Town Road” collaboration with BTS. What’s more, the rapper and K-pop megastars will be joined by Bill Rayy Cyrus and Diplo.

In addition, there will be star-studded performance of the Fame song “I Sing the Body Electric” in tribute to Grammy executive producer Ken Ehrlich to “acknowledge the importance of music education in schools.” Camila Cabello, Gary Clark Jr., John Legend, Debbie Allen, Joshua Bell, Common, Misty Copeland, Lang Lang, Cyndi Lauper, Ben Platt, and the War and Treaty will take place is the collaborative rendition.

If you’ll recall, all four of Lil Nas X’s guests have a connection to “Old Town Road”. Cyrus and Diplo appeared on one of the viral hit’s first remixes, and BTS member RM reworked the track into a version called “Seoul Town Road”.

Given the phenomenal pull of both Lil Nas X and BTS, one has to assume that the Recording Academy must be trying to break the internet, right? A guest-filled “Old Town Road” collab is a sure way to draw viewers, but considering the last-minute timing of this announcement, perhaps there’s another motive behind the booking.

In EEOC complaint that went public yesterday, ousted Grammys head Dugan revealed numerous instances of corruption, discrimination, rape allegations, and conflicts of interest with the Recording Academy. One of the more damning accusations detailed how rampant corruption in the Grammys’ nomination process has led to a wildly disproportionate number of white, male artists receiving awards over artists the voting membership deemed more worthy.

Lil Nas X is up for Album of the Year for his 7 EP, but K-pop icons BTS were shut out of the 2020 Grammy nominations entirely. So, from a certain angle, this collaborative performance could read as a last-ditch effort to demonstrate the Grammys’ “commitment” to diversity in the wake of the Dugan’s scandalous claims.

Stay tuned for more coverage of the 2020 Grammys. And in case you miss the show on Sunday, January 26th, BTS are expected to head out on a proper North American tour in April to support the forthcoming Map of the Soul: 7. Grab your concert tickets here.