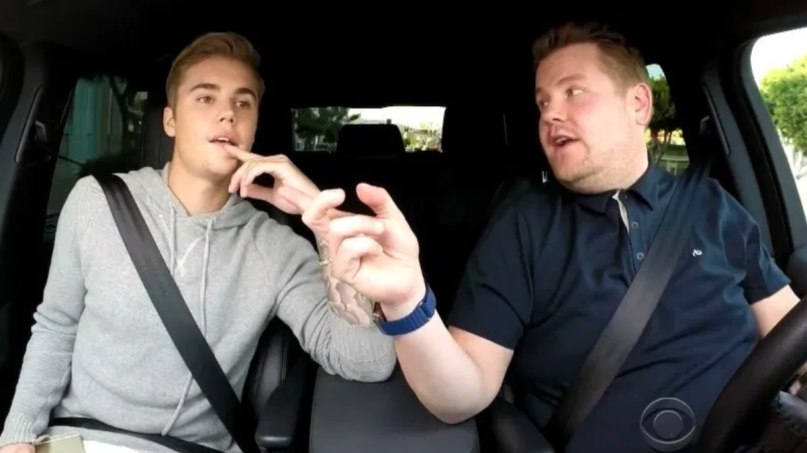 Look, we all know anything you see on TV or the Internet is, at best, 99.9% fake — even reality shows. But our ignorance of what goes on behind the scenes is what keeps us engaged and able to passively deny what we know deep down is the truth. Well, get ready for your reality to be shook, as a new viral video has revealed that Carpool Karaoke is a bunch of bull.

Well, sort of. James Corden and his Late Late Show guest still get behind the wheel of a car and belt out the hits together, so the “karaoke” part is legit. The trick is the whole “carpool” thing, the idea that this is just Corden and a musical artist hopping in an SUV and driving around town singing to the radio, just like you might do with your friends.

However, fans recently peeped Corden and upcoming returning guest Justin Bieber filming a new segment. Shockingly, the car wasn’t even touching the road; it was placed up on a tow dolly being pulled by a truck. That’s right, Corden doesn’t actually drive on Carpool Karaoke.

Now, save your gasp for something truly astonishing, because of course he doesn’t. There are laws against using cellphones while driving; do you really think it’d be any safer filming a TV show while steering an SUV? The windshield’s partially obscured by cameras, for Christ’s sake. Anyone involved with a show like this would want to minimize the risk to the celebrities in the vehicle, so taking out the possibility of driver error makes a lot of sense.

UPDATE, January 30th: Corden has addressed the “serious allegations” on The Late Late Show. He called the assertion “fake news,” noting that he actually is behind the wheel for the majority of the Carpool Karaoke shoots. There are, however, occasions “where we think it might not be safe, like a dance routine or a costume change… or I’m drunk.” When those “safety issues” exist, they do indeed tow the car.

“I’m just shocked that I’ve done something that upset people more than Cats,” he quipped.

“95% of the time I really am endangering the lives of the world’s biggest pop stars,” he added. He went on to reveal other false truths about the segment. “While we’re getting things out in the open, I don’t actually need them to help me get to work, right. Often, I’m at work already. We’ve also never once in the history of doing that bit ever used the carpool lane. There isn’t even a carpool lane on my way to work.”

In the name of full transparency, Corden even revealed a full list of Carpool Karaoke shoots in which he used a tow — and there are only five. Watch the full segment ahead.

Still, there’s something disquieting about watching the veneer of reality stripped away by cellphone footage. So if you’re ready to have your understanding of the world crumble around you, watch the clip ahead. Interestingly, the footage was shot by a co-founder of WaiveCar, a Los Angeles-based car-sharing startup.

Saw James corden and Justin Bieber filming carpool karaoke and this is why I have trust issues — he isn't even driving! pic.twitter.com/bkP9moGJmu