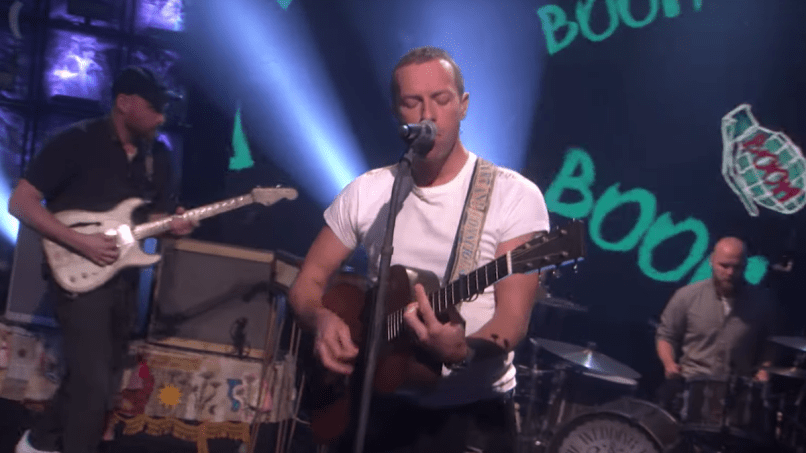 Coldplay aren’t doing a ton of press behind their latest double-album, Everyday Life. Part of that has to do with their unwillingness to tour until there are greener means to do so, but there are exceptions. When Ellen DeGeneres calls you to play on her show, for example, it’s hard to turn down. And so the British pop-rockers stopped by Ellen on Wednesday to perform two songs, “Orphans” and “Cry, Cry, Cry”.

For the latter track, the quartet sat amongst the audience, the crowd swaying and snapping along around them. One lucky fan even got a chance to join the band — sort of — miming the keyboard solo as she sat beside frontman Chris Martin. “Orphans” was a more standard Coldplay performance, filled with brightly animated visuals as the lyrics were drawn on the screen behind the band.


Elsewhere during the show, Martin and guitarist Jonny Buckland sat down with Ellen for a chat about their career and new LP. It was pretty standard talkshow banter, until Martin revealed that he once pitched John Krasinski and Emily Blunt on a poorly conceived A Quiet Place: The Musical. Unsurprisingly, they never replied. “So every time I see that trailer it makes me feel sick,” said Martin. “Because I thought, oh no, they must have thought I was taking the Mickey.”

Watch replays of the performances and interview below. Coldplay may not be touring at large these days, but they do have an appearance scheduled this Saturday, January 18th, at iHeartRadio’s ALTer Ego ’20 in Los Angeles; get your tickets here.