Film Review: Bad Boys for Life Scales Back and Gets Weird

Will Smith and Martin Lawrence return to Miami a little older, a little wiser, and a little wilder 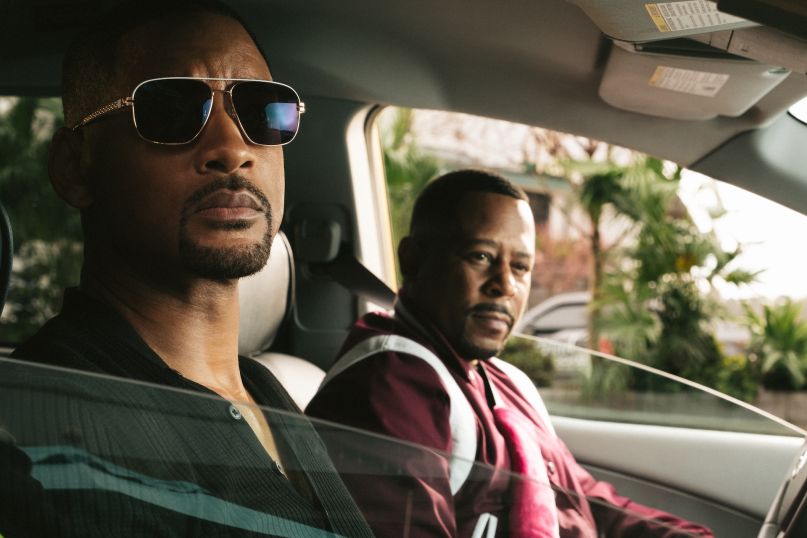 The Pitch: The third entry in what could be considered the fictionalized action cinema equivalent of Michael Apted’s Up series, Bad Boys for Life catches up with ladies man Mike Lowery (Will Smith) and married man Marcus Burnett (Martin Lawrence) almost 15 years later. After having defended Miami—and almost destroying the city in the process—the crime-fighting duo faces a new threat in Isabel Artreas (Kate del Castillo) and her son Armando Armas (Jacob Scipio). And this time? ::dramatic beat:: It’s personal … in more ways than one.

Whatchu Gonna Do? When the original Bad Boys was released in the spring of 1995, it felt like a transitional film between decades, blending the hazy-orange tinted quip-filled action films that dominated the box office in the late ‘80s with the more self-aware blockbusters that would come in the wake of Pulp Fiction. Savvy producers Don Simpson and Jerry Bruckheimer saw that a sea change was coming. The ultra-macho action stars of the ‘80s were on the way out and audiences were looking for something a little more funny and self-aware. After all, Bruce Willis’ turn as everyman John McClane in 1988’s Die Hard heralded the arrival of a new kind of action hero for the genre.

Will Smith and Martin Lawrence—largely known to audiences for their roles on Fresh Prince Of Bel-Air and Martin, respectively—expertly filled those roles, carrying over a likeability and familiarity to the characters of Lowrey and Burnett. Audiences related enough that a sequel — Bad Boys II — premiered in July of 2003 (almost a decade later, mind you) with Michael Bay once again returning to the director’s chair. As expected, particularly given Bay’s boisterous resume at the time, he doubled down on the hyperviolence of the original film to create what some junk-food cinema connoisseurs (and modern genre auteurs such as Edgar Wright) consider to be a masterpiece of gonzo action.

While Bay did not return to the directors chair for this year’s much-delayed second sequel, Bad Boys for Life, his music video aesthetics linger in the work of directors Adil El Arbi and Bilall Fallah and cinematographer Robrecht Heyvaert. It’s all in the perpetually moving camera, the saturated neon, and the sweeping shots of the Atlantic ocean and the Miami skyline at dusk. Each kinetic shot is edited at a brisk clip, of course, recalling Bay’s original vision. Though, if purists are really missing the guy, they can catch him in a cameo.

I’m Getting Too Old For This Shit: Bad Boys for Life wisely opts out of surpassing the over-the-top carnage of its predecessor. Instead, the film scales things back—as much as a Jerry Bruckheimer production can—to focus on its characters. The plot is a boilerplate revenge tale — that is, until it gets weird in the third act — but who cares? It’s Smith and Lawrence that audiences have come to see. Thanks to countless showings on cable TV over the past two decades, Lowery and Burnett have evolved into a beloved duo in the vein of Lethal Weapon’s Murtaugh and Riggs or the trio of Foley, Taggart, and Rosewood in the first two Beverly Hills Cop films.

Keeping things within the area code, Bad Boys for Life tears a few pages out of the Michael Mann handbook by setting its sights on the relationship between the two cops: lifelong friends who joined the force together and have saved each other’s asses on countless occasions. Exploring the same themes of aging and friendship as Quentin Tarantino’s Once Upon A Time…In Hollywood, Bad Boys for Life finds the two characters coming to terms with age and realizing they’re hardly the invincible superheroes that they once thought they were. However, one advantage Bad Boys has over Hollywood is that audiences have similarly aged with Lowery and Burnett.

But they’re not alone. This time around, they’re joined by Rita (Paola Núñez), a former flame of Lowrey and the leader of a team of young police officers in a special outfit named AMMO (who are clearly being primed for their own series of films.) The youngbloods of AMMO are a new breed of cop: they do things by the book, and they’re sort of dorky compared to the ultra suave Lowrey and even family man Burnett. They also utilize technology to surveil and bring criminals to justice, eschewing the style of brute force and explosions that Lowry and Burnett have perpetually incurred the wrath of Captain Howard (Joe Pantoliano). The world is changing and they need to adapt — or quite literally die.

To Live and Die in Miami: There’s admittedly an epic quality to this, the third chapter in the Bad Boys saga, reminiscent of the wannabe Greek tragedy of the John Wick series and the family soap opera of the Fast & The Furious films. This isn’t surprising. Looking back, the Bad Boys films have come to act as a distillation of the style of action cinema that’s popular at the time of their release. Take the original, for example, what with its one foot in ‘80s buddy cop films and the other in ’90s music video-inspired visuals and editing. Then look at its sequel, which may be peak “Bayhem”, fueled by wild violence and oversaturated colors. The whole thing screams of early aughts action.

Similar to Wick and Fast, there’s a weighted currency to the more emotional moments in Bad Boys for Life. Screenwriters Chris Bremner, Peter Craig, and action movie favorite Joe Carnahan treat all of the drama with a dose of severity, even despite all the soap-iness. Unlike past chapters, the writers really try to dig into the characters and their motivations. Whereas Smith’s Lowery was once all suave and silk shirts, he’s given some depth here as his origins begin to surface. Smith, in turn, delivers a memorable performance with the material, one that’s equal parts funny, emotional, and introspective.

At the same time, Bad Boys for Life retains the irreverent sense of humor associated with the series without overtly relying on winks towards the audience, largely thanks to Lawrence’s performance. Throughout the film, Lawrence’s Burnett almost acts as an omnipotent narrator, someone who has seen every over-the-top car chase movie and provides just the right quip, parlaying exactly what your average know-it-all in the audience is thinking. Yet Lawrence’s comedic chops and affable charm make this device work, never coming off as cloying or too cute for its own good. Even when his humor feels like it may be undercutting the “drama” of a scene, it brings the audience back to reality: This is a Bad Boys movie.

Yes, don’t get it twisted: Bad Boys for Life is hardly an arty meditation on friendship, life, and aging. The film still delivers an impressive amount of car chases, gunfights, and explosions. Without spoiling too much, Smith beats up an informant, a dead body destroys a minivan, a helicopter crashes, and a motorcycle chase through the streets of Miami is the centerpiece of the picture. Bad Boys for Life even has the imagination to indulge in the supernatural. No kidding: In the film’s slam-bang climactic firefight, the directors incorporate horror movie imagery. It’s a strange touch that, when looking back on the ultraviolent, almost Looney Tunes-inspired action of the second film, feels right at home. What the hell? Why not?

The Verdict: Bad Boys for Life thrives from stellar action filmmaking and could be an affecting closer to an action film trilogy, even if there are moments that feel like an attempt to build a cinematic universe of sorts (including a misguided post-credits tag). The quieter character gasps are appreciated, particularly following the extreme bombast of the second film, and while It could be a nice capper to a series that has spanned three decades, audiences would undoubtedly show up in another 17 years just to hang out with Mike and Marcus again. Maybe even two years.

Where’s It Playing? Bad Boys for Life crashes into theaters on January 17th.