Robert Downey, Jr. loses his mind in this total zoo of a movie 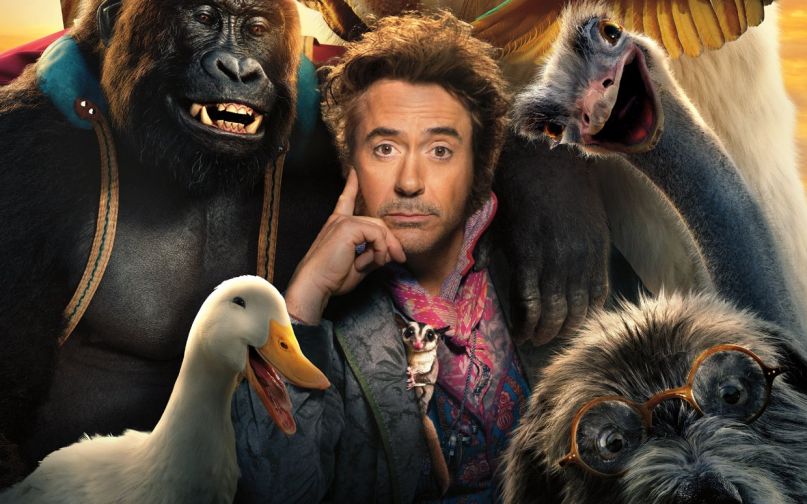 The Pitch: If you’re a child between the age five and nine, enjoy rude humor, into animals, and/or love going to the zoo, then this Doolittle is for you.

John Cena plays a polar bear that growls the word “bro” a lot, begging the question of exactly what time period this seemingly 19th-century fantasy is set in. Jason Mantzoukas plays a lazy-eyed dragonfly who barters a deal with organized ants, leading viewers to wonder about the presence of an Italian ant mafia in the small, miscellaneous-European island of “Monteverde.”

A little awkward and often forgettable, Dolittle is also a bit funny, even if (and we can’t say it enough), it’s strictly for the kids. It’s an overpriced but reasonably amiable circus of talent and animation in service of yet another adaptation of Hugh Lofting’s kids’ books. Doolittle is back, as exclaimed by the duck with a wooden leg (voiced by another Oscar winner, Octavia Spencer). He can walk with the animals, talk with the animals, grunt and squeak and squawk with the animals. He can also pull metal from the ass of a dragon, as it were.

Cats and Dogs Living Together! Mass Hysteria! Dolittle is not a great movie. It’s skittish in tone and fronted by a ho-hum lead performance. It’s also not risible enough to warrant a flashy, elaborate pan or a snarky hate-watch. No, Dolittle is just a middling effort on the part of director Stephen Gaghan, Downey Jr., and Universal Pictures. You never care about John Dolittle’s quest for a forbidden fruit, because of predictability and tropes. All human elements are PG to the letter, full of big eyes and villainous sneering. But the animals – allegedly doctored by Lego Movie editor Chris McKay and Teenage Mutant Ninja Turtles helmer Jonathan Liebesman, which we’ll get to – are fairly enjoyable. A little funky, snotty, and attention-deficit, too. But silly all the same.

What would Ralph Fiennes be like if he were a neurotic tiger with mommy issues? The joke and the sight of it play out long enough for the idea to work. Craig Robinson is a vengeful squirrel, shot by a young boy, trying his best to take revenge. Kumail Nanjiani as a touchy ostrich flies well enough. Cena’s polar bear, while somewhat lunk-headed, is chummy. Think CGI Looney Tunes-style joke-making. Wise asses, weirdos, and other archetypes, with rendered fur. Because after all, the well-articulated and embarrassingly well-cast creatures are the main attraction here.

The Doctor Is Out (Of His Goddamn Mind): On the other hand, Downey Jr. is just not compelling enough of a centerpiece. He’s a sideshow at best, muttering lines while acting bewildered in front of what were likely tennis balls and green screens waiting for the acting to pop in post. (Hey, it worked for the Avengers flicks.) But the now-former Tony Stark feels tame, ironically enough for a movie full of wild animals. When Downey finds the right riff, he can churn out outrageously clever and acerbic lines. He’s often best as an agreeable dick, whether in his Holmes movies, the Iron Men, or his Oscar-nominated work in Chaplin and Tropic Thunder. But here the Downey shtick is neutered, concealed in accents and wiggery. It’s okay to have him play straight against the wild kingdom, but his tetchy theatrics and propensity for heavy costumes suggests something bigger was in mind (perhaps before edits or studio notes).

He Got a Zoo: As now happens from time to time, Dolittle’s production drama is way more compelling than what ended up onscreen. From what the trades have suggested, Dolittle’s trip to the big screen was like a zoo. Gaghan, the Oscar-winning writer behind Traffic, needed a hand. Major reshoots reportedly went down with a new writer (McKay) and a director with more CGI experience (Liebesman, now a credited executive producer). The release was pushed back nine months, and is being somewhat dumped off in mid-January to make a quick buck under less scrutinous eyes.

The tinkering shows. Animal characters, voiced by actors far bigger than the roles they’re playing, seem to come and go with little reasoning. The blue and green-screen keying is nowhere near as smooth as many top-dollar productions. Even the joke-making (admittedly an at-times enjoyable facet) appears deeply shoehorned into what might have begun as a sincere effort. One minute, Downey laments the loss of his wife, the only human he ever loved. Seconds later, Cena’s bear riffs on his dad “stepping out for a pack of salmon.” It all smells of a troubled production in flux.

At the risk of sounding hyperbolic, this could go down as a new Hollywood classic: a para-text on the burdens of the mega production. By now, the 1967 Doctor Dolittle is almost better remembered as a late ‘60s Fox albatross than as a strange Best Picture nominee. Stories abound of Rex Harrison’s dislike of critters, the movie’s escalating budget to get animals to perform on camera, and its out-of-place corny musicality amidst late ‘60s renegade cinema like Bonnie & Clyde. A similar story plays out before our eyes here, one of a retrograde family affair with sticker-shock budgetary issues that feels out of place amid more thoughtful modern family movies and studio productions.

The Verdict: About as gross-out as the hit Eddie Murphy reboot and just as bloated as the Rex Harrison bazaar, Gaghan’s spin on the Doctor Dolittle legend is fine. Why fine? Well, it’s poor if you really want to ding things like fart jokes and attitudinal critters. But it’s also tons o’ fun if you’re a young viewer that likes, uh, fart jokes and attitudinal critters. And since parents may be more likely to read this than the youths, consider Dolittle from a minutes-and-movie-magic angle. At 100 minutes, with just enough digital chutzpah to keep everyone reasonably amused and never quite annoyed, Dolittle is tolerably fine.

Where’s It Playing? Hear the animals on January 17th.