In one clip, the 3D baby speaks directly into the camera about the impending apocalypse 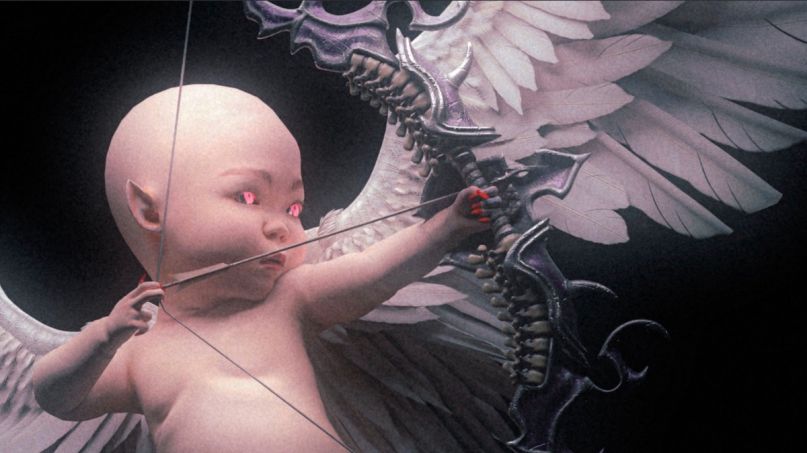 UPDATE: The original version of this story incorrectly identified the War Nymph avatar as a digital representation of Grimes’ unborn child with Elon Musk. The details have been amended and we apologize for the confusion.

Back in 2018, Grimes launched the mysterious @WarNymph account on Twitter. On Tuesday night, she debuted a connected Instagram, though both are still set to private. However, because this is the Internet, some fans have already shared the images and videos posted to the new account, revealing the War Nymph digital avatar Grimes has had in the works for over a year.

War Nymph is represented as a 3D, pink-eyed baby with wings, a bow-and-arrow, and sharp nails painted bright red. When a fan asked on Twitter if this character was meant to be her baby, Grimes responded, “Technically this one is a de-aged digital clone [of myself] but prob similar.” When a different fan asked what the hell she’s doing, Grimes tweeted, “If u follow the clues – the questions will have answers.”

Those clues, apparently, have something to do with the impending apocalypse. In one of the released videos, the 3D baby speaks directly into the camera about the coming days of death and darkness. “This is the end of the world. The world stands on a ledge. Death and the end is nigh,” it says in a whispery, quiet voice. “The next planet in the solar system… it’s called death. The sun explodes and we all die. The earth is going deafeningly quiet.” Watch the conspiratorial video below.

Word about War Nymph first started seeping out when Grimes appeared on the podcast Sean Carroll’s Mindscape back in November. She talked about how they created the avatar by taking a full digital scan of her body, and how she plans on utilizing War Nymph (which she refers to as “her”) to replace herself on social media and in music videos.

This actually aligns with a lot of what Grimes has been saying in the recent past. The artist otherwise known simply as “c” has said she planned on “killing off” her Grimes moniker and dreamed of putting a hologram on tour in her place.

Some fans are even speculating that an independently released album called War Nymph could follow her long-awaited new Miss_Antropocence release; the theory goes that Grimes would be taking the Frank Ocean route of releasing one album to satisfy a suffocating label contract and another as a true statement of her work.

Whatever the case, Miss_Antropocence is expected out next month. The effort includes “So Heavy I Fell Through the Earth” and “Violence”, while early teaser single “We Appreciate Power” was recently cut from the album’s final tracklist.

If u follow the clues – the questions will have answers