The character has largely been written off the show following controversy 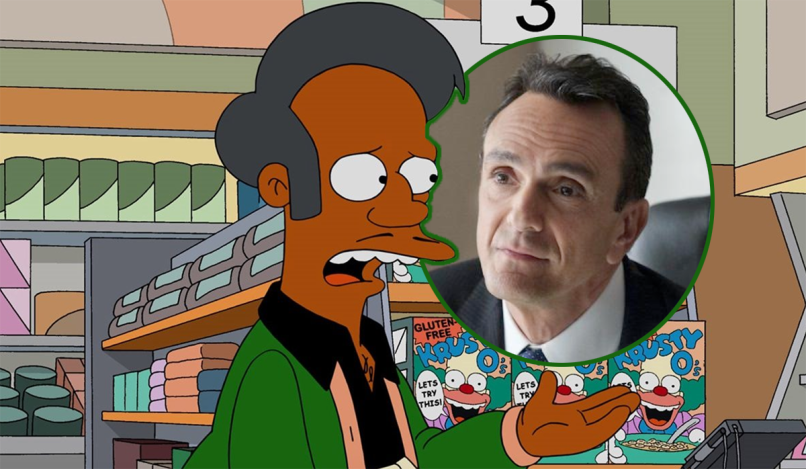 Apu in The Simpsons and Hank Azaria

Ever since Hari Kondabolu released The Problem with Apu in 2017, there’s been mounting controversy around The Simpsons character Apu Nahasapeemapetilon. The Indian owner of the show’s Kwik-E-Mart has long been voiced by Hank Azaria, whose depiction of the voice has been said to perpetuate South Asian stereotypes. While the status of Apu’s continued existence on the long-running cartoon has been up in the air, Azaria has now said he likely won’t be voicing the character ever again.

Speaking to SlashFilm during the Television Critics Association winter press tour, Azaria took a break from answering questions about the final season of IFC’s Brockmire to comment on The Simpsons. “All we know there is I won’t be doing the voice anymore, unless there’s someway to transition it or something,” he said. “What they’re going to do with the character is their call. It’s up to them and they haven’t sorted it out yet. All we’ve agreed on is I won’t do the voice anymore.”

Apu has indeed largely been absent from the current 31st season of The Simpsons, though show creator Matt Groening said last summer that the character wasn’t gone for good. “We love Apu. We’re proud of Apu,” he said at the time.

The show’s on-air response was even more dismissive of the controversy. During a 2018 episode called “No Good Read Goes Unpunished”, there’s a moment when Lisa says, “Something that started decades ago and was applauded and inoffensive is now politically incorrect. What can you do?” The camera then pans to a framed picture of Apu with the words, “Don’t have a cow!”, scrawled on it.

Marge responds, “Some things will be dealt with at a later date.”

Azaria previously addressed the controversy during a 2018 appearance on The Late Show with Stephen Colbert:

“My eyes have been opened. I think the most important thing is we have to listen to South Asian people, Indian people in this country when they talk about what they feel and how they think about this character, and what their American experience of it has been… Listening to voices means inclusion in the writer’s room. I really want to see Indian, South Asian writer or writers in the room — not in a token way — but genuinely informing whatever new direction this character may take, including how it is voice or not voiced. I’m perfectly willing and happy to step aside or help transition it into something new. I really hope that’s what The Simpsons does.”