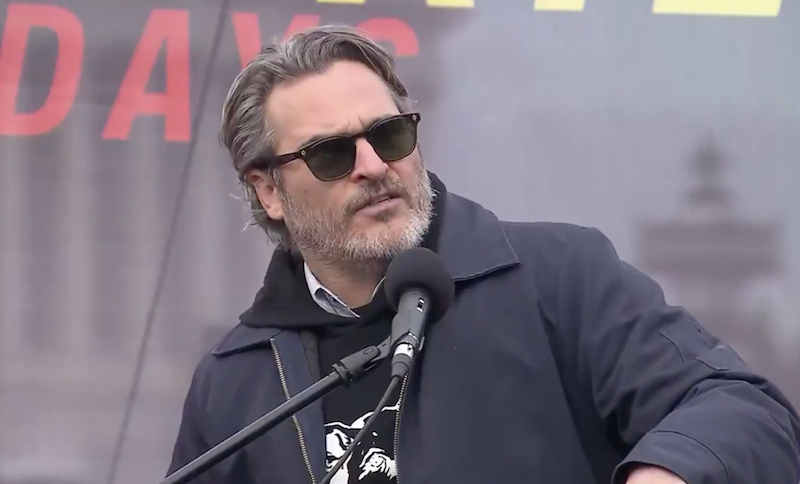 Fonda has been holding her Fire Drill Friday protest events at the end of every week since October 11th. Fresh off his Golden Globe win, Phoenix was in attendance to support the series’ final DC demonstration. This week, the focus was on “the major banks and investors that finance fossil fuel exploration.”

Prior to his arrest, the Joker star spoke about the ways in which he’s personally tried to fight climate change. “I struggle so much with what I can do [to fight climate change] at times,” he said in a video captured by The Hill (via Uproxx). “There are things that I can’t avoid — I flew a plane out here today, or last night rather. But one thing that I can do is change my eating habits.”

Joaquin Phoenix: "I struggle so much with what I can do [to combat climate change] at times. There are things that I can't avoid — I flew a plane out here today, or last night rather. But one thing that I can do is change my eating habits." pic.twitter.com/RaZILYq0La

Phoenix was taken away by police along with Martin Sheen and a number of other protestors. Since starting Fire Drill Fridays in the fall, Fonda, too, has been arrested four times. Fellow actors Sam Waterston, Sally Field, Ted Danson, and Rosanna Arquette have also been cuffed for the cause.

Phoenix’s arrest follows his strong call to action during his Best Actor acceptance speech at last Sunday’s Golden Globes. The 45-year-old opened his message by praising the Hollywood Foreign Press “for recognizing and acknowledging the link between animal agriculture and climate change” by going with a planet-based menu for the ceremony.

Later, Phoenix added that sending well wishes to Australia in the midst of their devastating wildfire disaster was “a beautiful gesture,” but “we have to do more than that.” “It’s great to vote, but sometimes we have to take that responsibility on ourselves and make changes and sacrifices in our own lives,” he said. “I hope that we can do that. We don’t have to take private jets to Palm Springs for the awards sometimes, or back, please.”

Watch video of Phoenix and Sheen being taken away by police below.

we’ve been pushed back too far by police to get a good look but: yes, Joaquin is up there, the joker is going to be arrested on the steps of the capitol pic.twitter.com/ykJYwjlIVw