The R.E.M. frontman recounted an interaction he had with the future president in the late 90s. 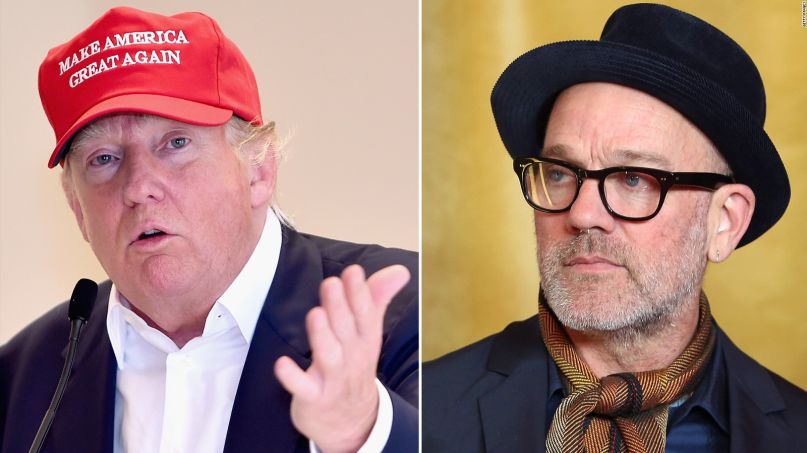 Michael Stipe appeared as guest on the Late Show with Stephen Colbert on Thursday. The former R.E.M. frontman, sadly, did not perform one of his two new solo singles, but he did share several fascinating andecdotes during his interview with Colbert.

Stipe revealed that he has stopped watching the news and deleted all of his social media accounts at the encouragement of his doctor. He was also asked about his favorite Radiohead song as a follow-up to Thom Yorke’s recent revelation that “So. Central Rain” is his favorite R.E.M. song. Stipe answered “Pyramid Song”, though he also professed his love for “Traffic”, the opening track to Yorke’s recent solo album, Anima.

Colbert also asked Stipe why Donald Trump continues to play R.E.M.’s music at his campaign rallies despite the band’s objections. After encouraging the audience to boo, Stipe explained that it’s a licensing problem. “There’s nothing we can do but respectfully request he not do so,” Stipe said. When Colbert asked why “respectfully,” Stipe responded, “Because we take the high road,” before quoting Michelle Obama’s mantra “When they go low, we go high.”

Stipe then recounted a personal interaction he once had with Trump. As he tells it, he found himself sitting next to the future president at a Patti Smith charity concert held at Joe’s Pub in the late 1990s.

“We got there late, and it was standing room only. They took us to the VIP overflow booth. This businessman, this big loud guy came in. He sat next to us. He was talking to [his date], and he kept talking to her through the performance. It was very disruptive and loud, frankly.”

Eventually, Stipe said he confronted Trump: “I told him, ‘Excuse me, that’s my friend. And you have to stop talking. What are you doing? Shut up!'” Stipe remembered saying. Trump eventually “got up and left.”