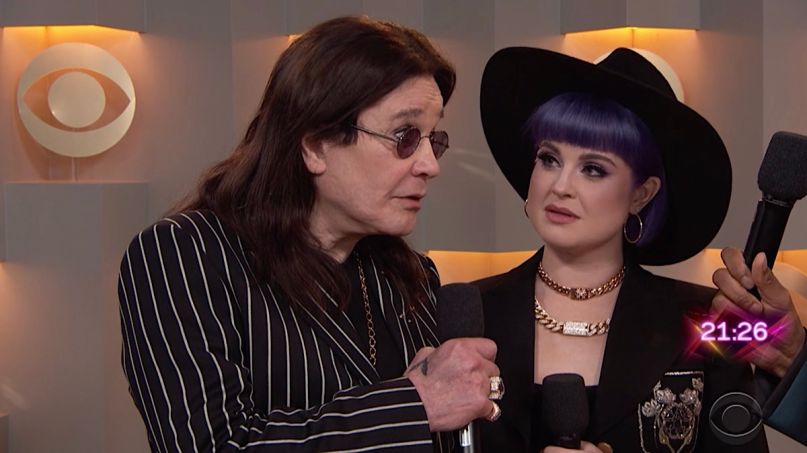 Just a few days after revealing that he’s battling Parkinson’s disease, the legendary Ozzy Osbourne appeared at the 2020 Grammy Awards on Sunday night. During a red carpet interview on his way in, the metal icon said he’d commit to his upcoming tour dates if he’s “well enough.”

“This last year has been hell for me,” said Osbourne on CBS’ Grammy Red Carpet Live pre-show. “I’ve had surgery on my neck. I’ve announced to the world that I’ve got Parkinson’s. It’s been one rock ‘n’ roll year for me.”


Ozzy, who was using a cane as he walked the red carpet with his daughter Kelly, was asked about his upcoming tour. He responded, “If I’m well enough, I’ll work towards it. I’m having physical therapy every day, five days a week. I’m trying, doing the best I can. Neck surgery’s not easy.”

Kelly added, “Seeing how far dad’s come this year and how far he’s come in the last week alone has just been incredible. I think coming out and telling his truth has been a weight lifted off of his shoulders. And even like his physical therapist is saying how far you have moved forward in this last week is insane.”

Last year, Ozzy had to postpone all of his 2019 tour dates after sustaining a fall at home in February. At the time it was revealed that the singer had dislodged metal rods that were inserted into his body due to an ATV accident several years earlier. Just this past week, he disclosed on Good Morning America that he was also diagnosed with Parkinson’s disease shortly after the fall.

Despite the diagnosis, Ozzy rescheduled all of the postponed tour dates for 2020.  A North American leg with support from Marilyn Manson is set to kick off in late May, while a European outing featuring Judas Priest is scheduled to launch in October. Now, it appears that those dates will only happen if Ozzy is physically able to take the stage each night.

All of the shows would be a continuation of Ozzy’s “No More Tours 2” trek, which started in 2018, and was meant to be the metal legend’s final tour. However, Ozzy refused to use the word “retirement”, saying he would continue to play one-off shows once the tour wrapped up.

During the actual Grammys ceremony, Ozzy appeared with his wife Sharon to present the award for Best Rap/Sung Performance, and to introduce a performance from singer H.E.R. While Sharon did most of the talking, Ozzy did manage to crack a couple of jokes onstage.

^ = with Marilyn Manson
* = with Judas Priest