Queens of the Stone Age Wowed by Young Girl’s Drum Cover of “No One Knows”: Watch

Nandi Bushell attacks the kit with ferocity in the "incredible" clip 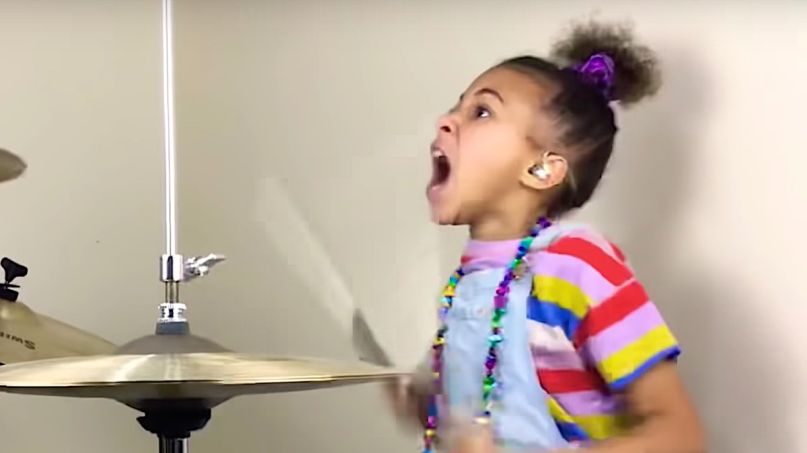 Nandi Bushell rocks QOTSA's "No One Knows", via YouTube

Remember the name Nandi Bushell, a young drummer who is a force behind the kit. In the 9-year-old’s latest video, she absolutely slays the Queens of the Stone Age hit “No One Knows” — so much so that the band was thoroughly impressed.

Last we reported on Nandi, she crushed Nirvana’s “In Bloom” back in November. As great as that was, she goes next level on the “No One Knows” cover. Coincidentally, Dave Grohl played on both original songs, serving as drummer on QOTSA’s 2002 album Songs for the Deaf.

The minute-plus YouTube clip of Nandi rocking “No One Knows” features the youngster going full force on the QOTSA song with rubber-like arms — adding in some cool facial expressions and stick twirls, to boot.

Queens of the Stone Age themselves were wowed by the performance, sharing the clip on Instagram, with the one word caption, “Incredible!!!” And it looks like Nandi had a blast playing the tune, writing in the YouTube description, “I LOVE THIS SONG!!! ‘No One Knows’ by @queensofthestoneage. I had so much fun rocking out!”

Meanwhile, Queens of the Stone Age also recently showed their love for Iggy Pop, who just received a Lifetime Achievement Grammy. The band posted a pic on Instagram of frontman Josh Homme and hardcore legend Henry Rollins posing with the godfather of punk as they helped him celebrate the honor.

See Nandi performing “No One Knows”, followed by both of QOTSA’s Instagram posts, below.