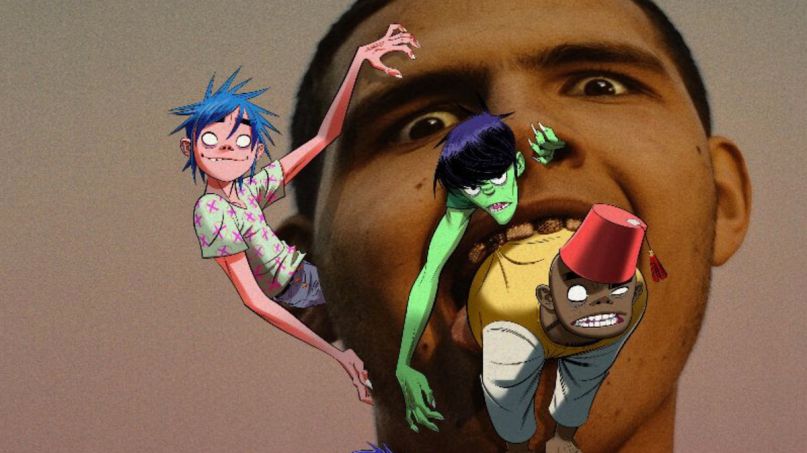 Song of the Week breaks down and talks about the song we just can’t get out of our head each week. Find these songs and more at our Spotify New Sounds playlist.

Count the longest-running (debut album turns 20 next year!) cartoon in music, Gorillaz, among the skeptics who’ve grown bored with the album-as-album format. Their new project, Song Machine, promises an episode-by-episode series showing the characters generated alongside their esteemed human counterparts throughout 2020. Maybe it will be some kind Mary Poppins trip. Mainly, this first installment proves that Damon Albarn and Jamie Hewlett’s creative revolving door is up-to-date and wide-ranging as ever by pulling in Slaves and grime sensation slowthai, whose 2019 breakthrough, Nothing Great About Britain, brought some snarling John Lydon energy to the genre.

Hence the rapping meshes with a post-punk feel that gives “Momentary Bliss” a bent Gang of Four strut when it bursts into full color halfway through. Gorillaz have no real genre themselves; they’re just sort of a funhouse mirror for other luminaries of the past and present. In the episode, Slowthai reads his lines off his phone as in-the-red synths approach choppy ska rhythms on the chorus, not completely unlike the way 100 gecs’ excellent “Stupid Horse” split the difference between ‘90s rave and ska last year. Admittedly, this rock-grime gumbo is the most exciting thing to come from this camp in a little while.

For Fans Of: It stands to reason that if you’re a fan of Gorillaz’s many other records, you’d love this one at this point, but they’re also so encompassing, whether making dance music with Vince Staples or reviving Bobby Womack, that it’s hard to imagine anyone who doesn’t fear the drum machine disliking this stuff. Gorillaz have reached Foo Fighters levels of all-connected crowd-pleasing.

Best Moment: A minute and 45 seconds into the episode when Slowthai first takes the mic after a farty synth patiently signals his cue and calls back to Radiohead: “Your potential, you lack credentials/ And you’re special/ So fucking special.”

Where to Go from Here: Time to brush up on Nothing Great About Britain if you haven’t yet, especially since it’s Brexit day. One great function Gorillaz serves is proudly being a one-stop shop to discover other A-list music folded into their own. In some ways, they’re like Obama’s summer playlist come to life.

Don’t Miss These Other Great Songs This Week: Beloved emo band The Hotelier and underrated folk-laptop-punk-nerd Emperor X just formed their own record label and the inaugural release is Emperor X’s own “Sad React,” a disquieting tune about what social media has done to our emotional process (“Somebody just stole my laundry/ Sad React/ They threw our friends in a labor camp/ Sad react”). To their left is the similar “For Your Pleasure,” a sideways gallop by the excellent dance-punk band Shopping that ups the ante rhythmically with odd-timed drum bursts and also laments the effects of consumerism on filling the contentment void. Since the worst president in the history of America is bound for acquittal today, you’ll need whatever cathartic social analysis you can get. Which leads me to the much-buzzed-about rapper Sada Baby’s new loosie “Big Eastside,” where he gives a white girl Fentanyl as “payback for slavery.”