Annie Clark also played guitar, bass, and keys on the new version of the Hyperspace track 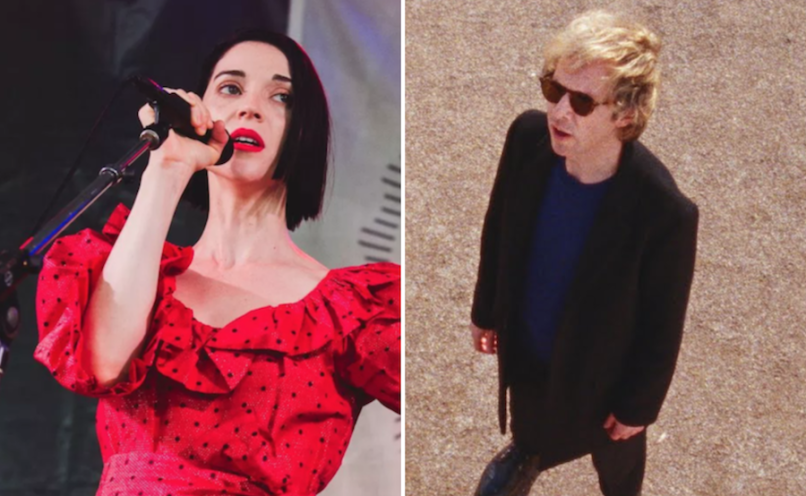 St. Vincent (photo by Ben Kaye) and Beck in the "Uneventful Days" video

Back in the fall, Dev Hynes (a.k.a Blood Orange) directed the guest-heavy music video for Beck’s “Uneventful Days”. Now, St. Vincent has also put her own mark on the Hyperspace song with a funked-up remix.

Beck’s original album version is a dreamy, scattering meditation that rides in on rolling drops of synthesizers. In the great Annie Clark’s hands, it becomes a tropical neon groover loaded with new guitar riffs, bass lines, and squiggling keys provided by Clark herself.

Speaking in a press release, St. Vincent revealed that Beck also had some input on the new take of “Uneventful Days”:

“I guess I was listening to a lot of ’70s Herbie and WAR at the time and wondering how much funk was inside me, too. I sent it to Beck and he dug it, but he said ‘it should be 3 bpm faster.’ And what do you know? HE WAS SO RIGHT. It made all the difference in the groove.”

Take a listen to the remix below.

Both St. Vincent and Beck will take part in the star-studded “Let’s Go Crazy: The Grammy Salute to Prince” on January 28th. Taking place at the Los Angeles Convention Center and airing on TV in April, the event will musical director Sheila E. leading a group of artists including Usher, John Legend, Mavis Staples, Earth Wind & Fire, and Foo Fighters. Prince collaborators Morris Day and the Time, Susanna Hoffs, and The Revolution will also be on hand.

Meanwhile, Beck is set to appear at a handful of festivals this year, including Pharrell’s Something in the Water, Down the Rabbit Hole, and INmusic Festival. Get tickets to all his upcoming dates here.