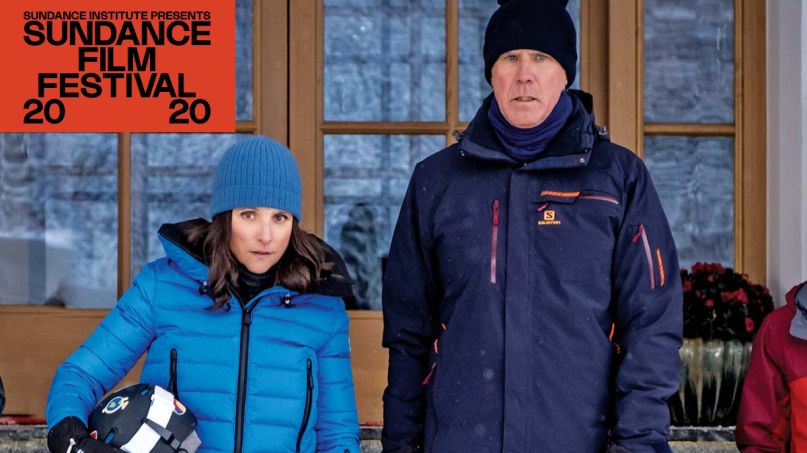 The Pitch: Even before they take their kids on a ski vacation to the Alps, there’s already something off about the dynamic between American couple Billie (Julia Louis-Dreyfus) and Pete (Will Ferrell). They tiptoe around each other’s feelings, and the chilly Alpine air is already thick with unspoken resentments and Pete’s lingering grief over the death of his father eight months prior. But not long after they settle into their luxurious ski lodge, a simple, single act throws the family into turmoil: a controlled avalanche barrels towards their outdoor restaurant during lunch, and in terror, Pete grabs his phone and flees, leaving his family behind. The snow dissipates harmlessly, but the damage to their relationship is already done, and Billie and Pete will have to deal with the fallout if their family is to survive.

Force Mineur: To make an American adaptation of Ruben Östlund’s searing 2014 dramedy Force Majeure seems a fool’s errand. Its Alpine setting and bleak tone seem absolutely calibrated for a Scandinavian mindset; it’s a blackly funny tragicomedy about an otherwise-enviable family unit torn asunder by repressed feelings, cell phones, and a man’s cowardice. There’s a philosophical and narrative nihilism on display that works a lot better in the international arthouse than in wide-release theaters on Valentine’s Day.

But writer-directors Nat Faxon and Jim Rash, Oscar winners for their screenplay behind Alexander Payne’s The Descendants, give it their level best, and the results are as admirably melancholic as you could expect for a major American release. Apart from the basic premise, some elements of the first act, and an uproarious cameo from Game of Thrones‘ Kristofer Hivju (who was in the original) as a stern resort security guy, much of Downhill forges its own modest path.  But that also makes it feel fairly slight, and the passive-aggressive squabbling of a rich middle-aged couple feels less important than the meatier subtextual void of Östlund’s original.

Every Day Is All We Have: What Downhill does focus on, however, are the ever-universal laments of lost youth and shirked responsibility, and it’s these moments where Faxon and Rash come closest to capturing Force Majeure‘s inimitable energy. To their credit, they commit wholeheartedly to the original’s muted tone: co-writer Jesse Armstrong (Succession) reigns in his caustic wit to make Downhill‘s most effective moments all about what Billie and Pete don’t say to each other. It’s all about micro-aggressions, which Ferrell and Louis-Dreyfus play to the hilt: Pete’s excuses and frustrating lack of acknowledgment needle the increasingly-aggravated Billie, who then takes it out on Pete in passive-aggressive ways, and the two engage in a dark dance of marital tension that feels uniquely empathetic to the two of them.

And, of course, the family is booked at a resort geared more toward younger, childless couples (“the Ibiza of the Alps!” chirps Miranda Otto’s cartoonish concierge Charlotte), throwing the regrets of age and time right in their faces. That’s thrown into greater relief with the sudden arrival of Pete’s friend Zach (Zach Woods) and his young girlfriend Rosie (Zoë Chao), who delight insufferably at their no-strings-attached trek through Europe. But all of these issues are played out with a tenth of the subtlety of the original, characters outright stating their positions with hardly any subtext. By paring down the original by more than a half hour, and stripping the performers of all their energy, it’s hard to really mine any kind of insight from the proceedings.

The Verdict: Does Downhill surpass, or even match, the revelatory energy of Force Majeure? Of course not. And quite a few things, from the subtextual complexity of its themes to the deliberately-meandering nature of its pace, get lost in translation. Louis-Dreyfus is all perfectly coiled passive-aggression, and the centering of the wife in this equation is Faxon and Rash’s major contribution to the remake’s existential energy. But in turning Force Majeure from a sophisticated tale of broken masculinity into a thunderingly-obvious marital drama, Downhill unfortunately lives up to its title.