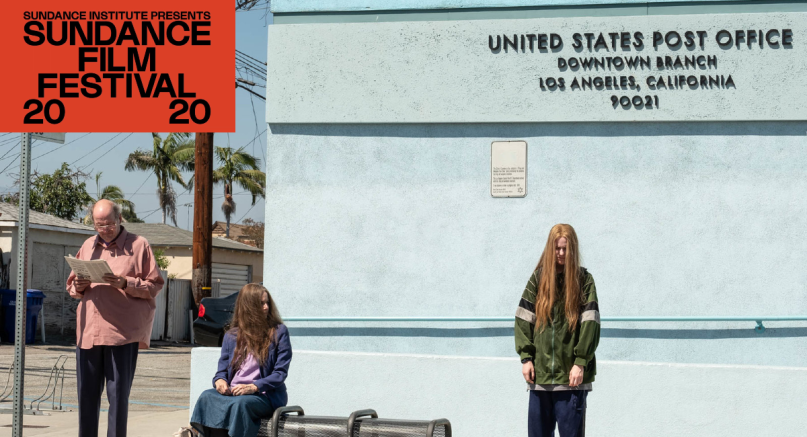 The Pitch: Meet the Dynes: parents Robert (Richard Jenkins) and Theresa (Debra Winger) with daughter Old Dolio (Evan Rachel Wood). They’re con artists, in the most small-time sense of the word; their grifts include sneaking into post offices to steal stuff out of the PO Box next to theirs, trying (and failing) to return gift certificates or cash items, and so on. They barely scrape by an existence in the streets of LA, living in a vacant office space behind a bubble factory(?) that leaks every day; not only that, they’re $1500 behind on rent and facing eviction.

Enter Melanie (Gina Rodriguez), an extroverted, deeply curious woman who gets roped into their latest scheme and decides to stick around. Is it curiosity? Is it boredom with her everyday life? Is it an unexplainable attraction to Old Dolio, a twentysomething emotionally stunted by her neglectful, emotionally abusive parents? Whatever the case may be, her presence gives the Dynes both their greatest chance for success and the keys to their own destruction.

The Fourth of July: “Preciously broken” is a descriptor you could apply to a lot of writer/director Miranda July’s characters, but they certainly fit the characters at the center of Kajillionaire, her first film in almost a decade. Her films are often noted for being surreal, precious; her biggest detractors break out that most dreaded of terms, “twee.” Kajillionaire‘s no exception, but it might be her most coherent and story-driven effort to date, affectations and all. The LA of Kajillionaire is one of droll, quirky folks who seem to largely take the Dynes’ shenanigans in stride. Their landlord is a whimpering, anxious wallflower, one unsuspecting mark (Da’Vine Joy Randolph) a masseuse who seems mostly befuddled at their anxiety-driven grift.

The Family That Parlays Together Stays Together: July’s heightened world also applies to its characters. The Dynes are a bundle of neurotic affectations; Robert and Theresa are old-school conspiracy theorists, terrified of flying and LA’s intermittent tremors (Robert keeps warning about “the big one” that’ll come to take them all, which just so happens to come during the film’s emotional climax). Old Dolio — named after a homeless man who won the lottery and erroneously promised he’d write her into her will if they did so — is a monotone mess of long, straight, sandy-blonde hair draped over a figure-masking tracksuit. Rodriguez’s Melanie is the ‘normal one’ in the dynamic, which helps funnel July’s character quirks through a more normalized perspective.

Kajillionaire is these four actors’ sandbox to play around in, and they have a singular chemistry that sells even the broadest of July’s conceits. Jenkins and Winger run every single reaction through the con man’s calculus of ‘what does this get me?’, right down to the way they estimate the value of a stolen tie. “This isn’t cheap,” Robert says to Old Dolio. “You can’t see it because you’re not of gentle birth.” But Wood’s the clear standout; her Old Dolio is all shrugged shoulders and deep, monotone gruffness, with bursts of surprising aerobatics. The sight of her and her family limboing past a low wall to avoid the watchful eye of her landlord is an early contender for one of 2020’s most interesting images.

Family is Kajillionaire‘s chief concern, as noted in an especially poignant setpiece where the clan tries to rob a dying man’s house, only for him to ask them to pantomime the everyday rhythms of a family (the clinking of silverware, conversations about work and school) so he doesn’t feel alone in his final moments. It feels like the entire film in microcosm — July dutifully pulling apart the components that make a healthy family to see what they’re made of.

The Breast Crawl: But amongst all the deeply precious dark comedy on display, Kajillionaire is a movie about loneliness, and the mistakes we make in doing what’s best for our kids. One of Old Dolio’s cons is filling in for a woman at a court-mandated positive parenting seminar, where she begins to suspect her parents didn’t give her the kind of love and attention other kids receive.

Robert and Theresa, for their part, make no excuses for their neglect: they didn’t ever make her pancakes, or give her birthday presents, or call her ‘hon’ because, to them, it seemed “insincere.” They’re those parents who insist on talking to their kids like adults taken to the furthest possible conclusion: because Old Dolio was forced from birth to be a grownup, she never knew what it was like to be a child.

And that’s where Melanie comes in, all smiles and excitement and sex appeal, which ends up turning Kajillionaire into a decidedly unconventional queer love story in its final act. “Put on more clothes!’ grunts Old Dolio at Melanie, who spends most of the movie in a crop-top that used to be a dress before she cut the rest of it off to make a blouse.

The Verdict: Whether a treatise on the complexities of family dynamics, or the transformative power of love, or a dollhouse exploration of weird, broken people flailing for meaning in an uncertain universe, Kajillionaire carries plenty of rewards for those who are willing to succumb to July’s particular set of skills. We don’t choose our family, but we can choose what we do with them; even through the emotionally-stunted eyes of such an affected character as Old Dolio, some surprising insights into that subject can be found.