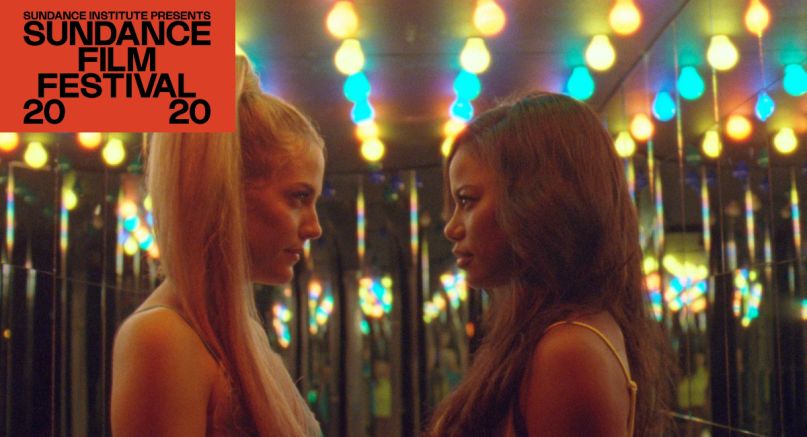 The Pitch: “Y’all wanna hear a story about why me & this bitch here fell out????????” began Aziah “Zola” Wells’ epic 2015 Twitter thread, a near-mythic tale of strippers, murder, and kidnappings that went immediately viral. Five years later, here we are, with the first film ever derived from a series of tweets, recounting the story of how Zola (Taylour Paige) falls in with a fellow stripper named Stefani (Riley Keough), who ends up roping her into a road trip to Tampa with her boyfriend Derrek (Succession‘s Cousin Greg himself, Nicholas Braun) and her ‘roommate’ X (Colman Domingo). But it doesn’t take long before Zola figures out the real score: Stefani turns out to be a sex worker “popping pussy for pennies,” with X as her unpredictably violent pimp. If Zola’s gonna survive the trip, she’s going to need to adapt and roll with the punches… or just sit back and watch the whole thing implode around her.

Pimpin’ Ain’t Easy: As you might expect from an A24 movie that adapts a sensationalist Twitter thread (Wells has since admitted that some of the grislier details were turned up to 11), Zola is the platonic ideal of the A24 Film. All the aesthetic hallmarks are here: the grainy, 16mm photography from In Fabric’s Ari Wagner (taking on the griminess of a ’70s exploitation film), the moody, propulsive trap-tinged score from Mica Levi, the elliptical, dreamlike editing from Joi McMillon. It’s no wonder James Franco wanted to direct this initially; Zola thrums with Spring Breakers energy.

Janicza Bravo, directing her second feature after Lemon, brings her debut’s sense of pitch-black comedy to the forefront — it’s winkingly abrasive, reveling in its characters’ larger-than-life personalities and daring you to look away from their uglier tendencies. Keough’s Stefani is the kind of Bhad Bhabie-caliber white girl who revels in popping off with a thickly appropriating AAVE accent, which hilariously doesn’t escape Zola’s notice. Braun’s Derrek is the perfect use of the actor’s lanky awkwardness, Derica Cole Washington coating him in ill-fitting streetwear and fittingly dorky chinstrap. As for X, Domingo oozes menacing charm and a thick Transatlantic baritone, until he’s tested a bit too much and X’s native Nigerian accent leaks out.

Who You Gonna Be Today, Zola? But centering all of this mayhem is Paige’s stunning breakout as Zola, who expertly nails the role’s delicate balancing act of protagonist, audience surrogate, and Greek chorus. At all times, Zola is the one who recognizes the sheer fuckery of this whole situation, but is essentially threatened into compliance; even so, she manages to hold her ground against X, and even find ways to improve his and Stefani’s business. She and Keough have tremendous chemistry, such that you can tell why they might be drawn together, even as their personalities grate on the other like two like poles pushing away from each other.

What If Phones But Too Much: Even though it takes on the trappings of a ’70s crime flick (flowery fonts and all), Zola manages to weave its social media origins into the fabric of the filmmaking itself. Push notifications invade the sound design at numerous moments, serving as everything from character motivator to narrative rimshots. Dates and times pop on screen in the Apple home-screen font, and one crucial moment comes when Zola literally mutes the movie smartphone style. It’s a film entirely cognizant of the way we interact and build our personas through social media (like the real Zola did with her thread). Bravo and co-writer Jeremy O. Harris even give Stefani her own uproarious POV-switching set piece that allows her to salvage her reputation (“I fuck with Jesus,” Keogh confidently brays).

The Verdict: For all the (justifiable) buzz coming out of Sundance around this film, Zola‘s not without its faults. The script is a little too loosy-goosy for its own good, and the last 10-15 minutes are admittedly a lackluster resolution to the high-tension hijinks on display. But until that point, it’s downright thrilling to watch a film breeze through its grimly funny energy with such exuberant confidence, especially with such a new, vibrant voice in Paige. The only thing we have to worry about is: What’s the next super-long Twitter thread to get the feature film treatment? (Quick, someone turn off Seth Abramson’s phone.)