System of a Down’s John Dolmayan teams up with M. Shadows and Tom Morello for cover of Radiohead’s “Street Spirit”: Stream

The SOAD drummer is releasing an entire album of cover songs 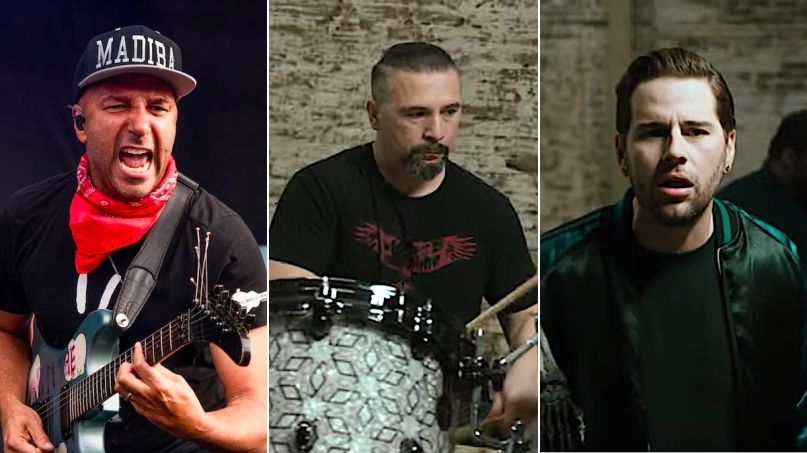 System of a Down drummer John Dolmayan is set to release an album of cover songs, and the first single is an ambitious one. The stickman teams up with Avenged Sevenfold singer M. Shadows and Rage Against the Machine guitarist Tom Morello for a rendition of Radiohead’s “Street Spirit”.

Dolmayan will release the album under the title These Grey Men, which was originally the name of his side project. The LP contains eight cover songs and arrives on February 28th.

The cover of “Street Spirit” features Shadows delivering a raspy vocal that’s a far cry from Thom Yorke’s ethereal singing on the original. Around a minute and a half into the cover, it goes in a decidedly hard-rock direction, with Dolmayan’s drums and Shadows’ singing both taking a heavy turn. A string section and a blistering guitar solo from Morello follow, adding a dramatic vibe to the last 90 seconds of the track.

Regarding the decision to cover Radiohead, Dolmayan told Rolling Stone, “This song in particular is a really touching and moving song. I love the morose, in-your-room-and-it’s-raining-outside, it’s cold, and your girlfriend dumped you feeling that this song always gave me.”

He added, “But when I listened to it, I’d be like, ‘I kinda wish the drums came in earlier,’ or, ‘How would [John] Bonham approach this song if this was a [Led] Zeppelin song?’ Because I’m such a fan of the song, I wanted to do a version of it in homage.”

The song is also significant in that it marks M. Shadows first new recording since a vocal cord issue forced Avenged Sevenfold to cancel their summer 2018 tour. “I’ve always respected Radiohead but wasn’t familiar with their full catalog,” said Shadows in a statement. “When John sent ‘Street Spirit’ I instantly was blown away by the sounds. Since then, I have been on a huge Radiohead kick. Adding Tom Morello to our version was the icing on the cake.”

The “Street Spirit” cover also features guitarist James Hazley, bassist Tom Copossela, and keyboardist Danny Shamoun. A video for the track can be seen below.

Elsewhere on the album, Dolmayan covers songs by Talking Heads, Madonna, Eminem, and more. His System of a Down bandmate Serj Tankian handles vocals on a cover of David Bowie’s “Starman”. See the full tracklist below.

Previous Story
Brad Pitt confirms he passed on the Neo role in The Matrix
Next Story
Billie Eilish and brother Finneas drive into the ocean in new “everything i wanted” video: Watch
Popular
More Stories
[fu-upload-form form_layout="media" title="Submit Your Photo"][input type="hidden" name="ugc" value="1"][/fu-upload-form]