10 Lessons We Learned From The Good Place 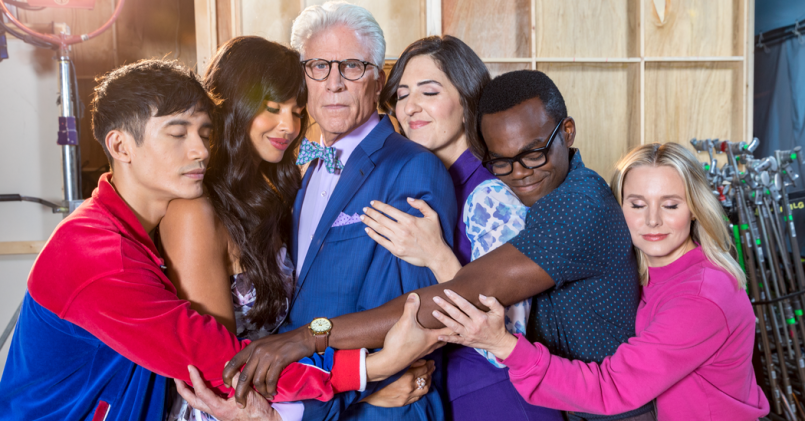 Cast of The Good Place (NBC)

As actor Marc Evan Jackson – who plays Shawn, head honcho of the Bad Place – often says as host of The Good Place: The Podcast: “The Good Place is an unusual half hour of American network television.” He’s not wrong. While The Good Place is just as funny as creator Michael Schur’s other primetime hits (Parks and Recreation, Brooklyn 9-9), it isn’t typical for a network comedy to have philosophy professors on call to aide the writing staff.

The Good Place asks some amusing questions: Which U.S. Presidents were secretly bi? Is it ethical to drink almond milk when you know it has a negative environmental impact, but you love the way it coats your tongue in a weird film? Yet Eleanor Shellstrop (Kristen Bell) and the gang also pose some unanswerable moral conundrums, and even after the finale, we may still find ourselves asking what it means to be a good person.

Now that our favorite weekly crash course in philosophy has aired its series finale, we may lose track of how to be our best selves. But when you need – as Michael (Ted Danson) would put it – a push in the right direction, you can always reflect on the lasting life lessons you learned from The Good Place.

The Rundown: In order to hide the fact that she doesn’t belong in The Good Place, Eleanor starts learning about ethics from Chidi Anagonye (William Jackson Harper). Going back to school in the afterlife is a drag, but Eleanor is starting to get the hang of it. When she can’t decide what frozen yogurt flavor to get (How can you choose between the taste of “Full Cell Phone Battery” and “Finding Out Your True Bra Size”?), she steps aside to let the next person in line order while she makes up her mind. It’s a simple, effortless act of kindness – but for Eleanor, it’s a big step in the right direction.

The Lesson: Sometimes, being a good person is so much work. Sure, it would be really nice to do your friend’s laundry for them when they’re having a hard time, but that’s something that Season 1’s “Real Eleanor” would do. But even “Fake Eleanor” is capable of taking simple steps to not be an ashhole: don’t hold up the froyo line! Don’t leave dishes in the sink for Chidi to clean up! Don’t steal all the jumbo shrimp at the welcoming party!

Good to Remember When: You’re having a bad morning, so you go to the cafe for a pick-me-up, but it’s taking a little longer than normal to get your macchiato. You could yell at the overworked barista who’s just trying his best, or you could just… Not be an ashhole? It’s not that hard!

02. Don’t Compare Yourself to Others

The Rundown: The tall, glamorous, socialite-philanthropist Tahani Al-Jamil (Jameela Jamil) is everything Eleanor is not. Tahani tries to befriend Eleanor, but our Margarita-loving anti-heroine is convinced that the gesture is a phony trap. Eleanor must accept that Tahani’s gift – a plant – is really just a plant, and not part of a larger scheme to sabotage her spot in The Good Place.

The Lesson: As the series goes on, Tahani becomes more vulnerable, revealing the lasting impact of her parents’ impossibly high standards on her self-esteem. In later seasons, Tahani begins to look up to Eleanor for her courage and resilience, while Eleanor remains in awe of Tahani’s effortless grace and elegance. Sometimes, we’re more forgiving of others than ourselves – when you’re your own worst critic, try to imagine yourself from the perspective of your closest friends.

Good to Remember When: All of the people you went to college with are getting super fancy jobs at super fancy places, and you’re still figuring it out. But there’s no use in comparing yourself to them; you’ll do you, they’ll do them, and you’ll all be just fine.

The Rundown: After her neighbors in The Good Place find out that she doesn’t belong there, Eleanor throws a party. She gives a speech to all of the guests and apologizes for the trouble she has caused, but one neighbor asks, “What can you possibly say to us that will make up for your actions?” Shrugging her shoulders, Eleanor replies, “Pobody’s nerfect?” The terrible spoonerism somehow manages to crack-up the crowd (probably because they’re actually demons trying to torture her, and they’re playing the long game).

The Lesson: Sometimes, you’re going to fork up. But don’t be so hard on yourself. It’s part of being human. Shake it off, figure out what went wrong, and learn from it.

Good to Remember When: Your cover band is playing a set at the local sports bar, but you mess up a little bit during your big solo on “Santeria.” You’re feeling kind of down about it, but there’s no use dwelling on things you can’t change. If the drummer gives you shirt about it later, just shrug and say, “Pobody’s nerfect?”

04. Think Outside of the Box

The Rundown: Holy motherforking shirt balls! Eleanor, Chidi, Tahani, and Jason (Manny Jacinto) have been in The Bad Place all along. With some critical thinking skills that would make the Arizona public school system proud, Eleanor solves the puzzle that the all-knowing demon Michael deemed unsolvable.

The Lesson: The Good Place teaches us that friendship can help us overcome insurmountable adversity. But, if you’re friends with people like Jason Mendoza (also known as DJ Music), you might also want to lean on your own intellect.

Good to Remember When: If you have a complex problem, it might require a nuanced solution. For example, let’s say you’re a United States legislator…

05. When All Else Fails, Throw a Molotov Cocktail

The Rundown: The “Soul Squad” are wanted in The Bad Place for escaping the demons’ torturous grasps. As a last resort, they resolve to find the Judge of the universe (Maya Rudolph), but in order to get to her chambers, they must traverse through The Bad Place. The others are nervous about their lack of a plan for this high-stakes mission, so Jason offers his trademark wisdom: throw a Molotov cocktail, and boom! Now you have a different problem.

The Lesson: Just blow things up?

Click ahead to learn more lessons from The Good Place…