Chet Hanks, Tom Hanks’ rapper son, spoke in a fake Jamaican accent for the entirety of the Golden Globes 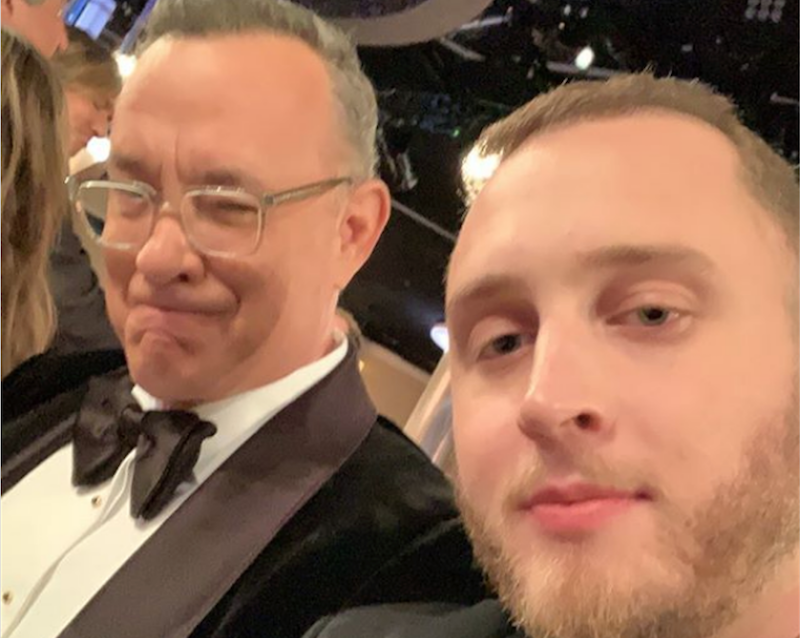 While Tom Hanks took home the top honor at last night’s Golden Globes — the Cecil B. DeMille Award, which rewards an actor’s lifetime achievements and contributions to the industry — it was his son Chet Hanks who stole the social media spotlight thanks to a bizarre clip he filmed on the red carpet.

In the video posted to his Instagram, Chet Hanks welcomes his family, friends, and “the whole island” to the Golden Globes red carpet… while speaking Jamaican Patois. “BIG UP FIMI WHOL FAMILY SOON COM AT DI AWARDS NA SEEN 🔥 🔥 🔥 CHUNE IN,” he captioned the video. Throughout the awards show, he shared Instagram stories of the night’s big winners like Quentin Tarantino, Brad Pitt, and Leonardo DiCaprio giving speeches onstage, tossing in his own accent-laden commentary along the way.

Naturally, people questioned Chet Hanks’s choice to use a Jamaican dialect at an American awards show, especially given his past as a wannabe rapper who wouldn’t stop using the n-word. While the accent raised eyebrows, his mom, Rita Wilson, was cracking up. “Maybe the best laugh of the night,” she commented on Instagram. Tom Hanks himself hasn’t weighed in on his son’s antics yet. Watch the video below.

Since entering rehab for drug addiction in 2015, the 29-year-old Hanks has largely left his attempt at a hip-hop career behind him. Instead, he’s been following in his dad’s acclaimed footsteps, appearing as recurring characters on TV shows like Maron, Shameless, and most recently Empire. Perhaps this puzzling Patois was his way of further separating himself from the legacy of his iconic father; as he told Too Fab back in the fall, “If I invented a cure for cancer tomorrow, in the article it would say, ‘Tom Hanks’ Son Invents the Cure for Cancer,’ you know what I mean? It’s inevitable.” Even still, the whole thing is massively cringe.

Meanwhile, while Tom Hanks may have been applauded for his work in Hollywood over the decades, he isn’t stopping now. Next up, he’s set to play Elvis’ manager in an upcoming biopic about the singer, and he’s reuniting with Steven Spielberg for a Band of Brothers follow-up series. Maybe he’s trying to out-do his award-winning self.