Including a cover of Rush's "A Passage to Bangkok" 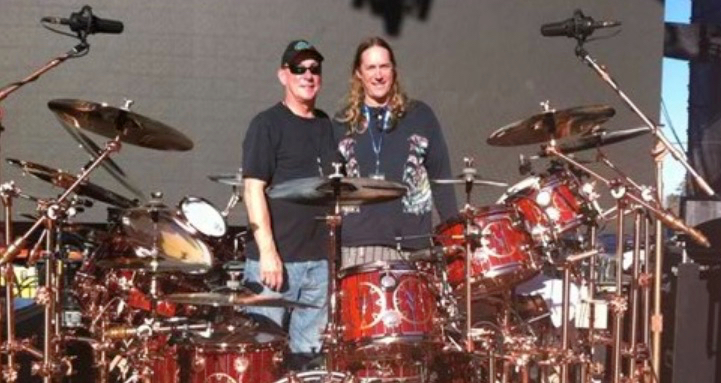 Neil Peart with Danny Carey, photo via Rush is a Band Blog

Rush’s Neil Peart was heavy on Tool’s minds as they took the stage in San Diego on Friday night, as the band paid tribute to Rush’s legendary stickman on three separate occasions.

First, Tool swapped out “Cold and Ugly” from the main portion of their set and replaced it with a cover of “A Passage to Bangkok”, the second song from Rush’s 2112 album. Later, during the first encore, drummer Danny Carey played a solo rendition of Tool’s “Chocolate Chip Trip” with an image of Peart projected behind him. And when Tool walked off stage following their finale performance of “Stinkfist”, Rush’s “2112” was played aloud on the speakers. Watch fan-captured footage below.

(Read: 10 Moments That Show the Awesomeness of Neil Peart)

As two of rock music’s most celebrated drummers, Carey and Peart crossed paths over the years. There’s one video from 2011 of the pair in the studio with The Police’s Stewart Copeland and Les Claypool, and another from 2015 of Carey, Peart, and Copeland rocking out for South Park co-creator Matt Stone.

Since Peart’s tragic passing on Friday at the hands of brain cancer, a trove of tributes have poured in from musicians (including Dave Grohl), actors (such as Jason Segal and Paul Rudd), and even Canada’s prime minister.