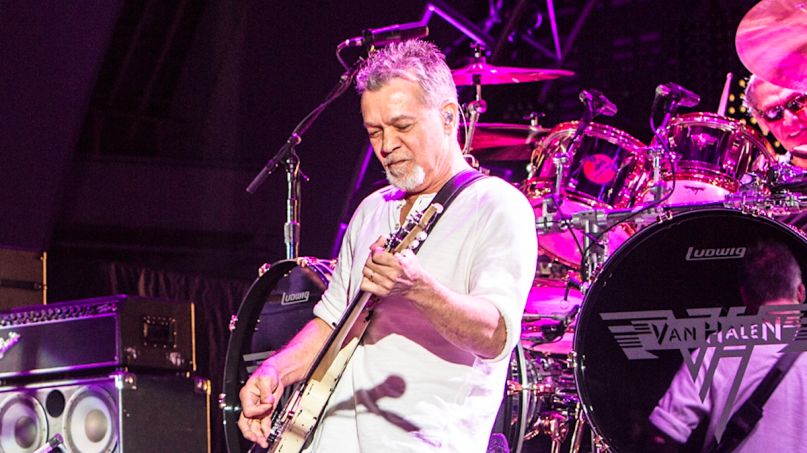 A fog of skepticism rolled in after guitarist Eddie Van Halen famously told Billboard that he didn’t listen to any music other than what he’s actively recording, but as you delve deeper into his self-named band’s catalog, the ear confirms his statement. As he grew further from his Pasadena party band days, which obligated him to be up on all kinds of popular music, Eddie, the band’s music writer, took in less and less new musical stimuli.

The result was an idiosyncratic sound, heavily influenced by classical music, ’60s rock, and ’70s hits, but not much else. So, the same way someone stuck on a desert island with the same five books to read might start to narrow his world view, Van Halen’s songwriting fell out of step with the modern world — thundering drums mingling with guitar flurries, often paired with tinkling keyboards and background vocals that sound like they’re from a chorus of angels. Still, it worked for the band as they released successful albums across three decades.

Balance, released January 24, 1995, was the band’s last studio album with singer Sammy Hagar, who left the band (either quitting or fired, depending upon who you believe) about a year after it came out. Which is a shame, because Balance hints at a possible musical shift that might have resulted in a different direction for the band.

Van Halen, perhaps more than most other bands, exists in distinct phases. There’s the obvious split between the David Lee Roth and Hagar lead singer eras. But within that split, there’s also the band’s embrace of keyboards into their sound, most pronounced on 1984, which featured “Jump”, the band’s keyboard-driven hit. Roth and the band parted after that album, and Hagar’s tenure was defined by more keyboard-forward music. And while the band never abandoned guitars or guitar solos (Or drum solos. Or bass solos. Van Halen concerts could go for hours, largely because much of the show was performed one instrument at a time), 5150 and OU812, the band’s first two albums with Hagar, are defined by the presence of both keyboards and ballads.

Which is what made Balance such an apt title for their final album with Hagar. Balance saw Eddie taking keyboard sounds and riffs and fully integrating them into his guitar work. Van Halen was famous for what he called the “brown sound” of his guitar. It spoke to a certain amount of distortion and a wideness of frequency that allowed him to take up a lot of sonic space on Van Halen tracks. It also gave his rhythm guitar a chugging propulsiveness. While words like chugging and distortion tend to trigger metal associations, Van Halen’s guitar playing always had a certain restraint and control that kept the band’s songs firmly rooted in rock and roll.

Balance saw Van Halen embrace a sonic shimmer that allowed him to evoke both instruments within one single performance in a way neither the guitarist nor the band had before, with Eddie flawlessly balancing the two.

“Can’t Stop Lovin’ You” is a ballad that would have been right at home on 5150. The melody is so ’80s that it practically conjures the smell of food courts and leg warmers. It’s so ’80s that even Stranger Things might have found it a little too on the nose had it been era-appropriate. But where the band would have previously used keyboards to execute a track that’s probably inappropriately used by marginal high school athletes to assemble highlight reels, on Balance the clean guitar drives the song, filling in for the missing keyboards.

The guitar tone dips a toe into Tom Petty territory, but Eddie still deploys his riffs strategically, quickly establishing this isn’t Hagar fronting the Heartbreakers. But the absence of keyboards and familiar presence of Eddie’s guitar runs give the songs a heaviness. The song isn’t pop. It’s not “Jump” (which is a great song). It’s Van Halen hitting a groove that exists parallel to contemporary music, but also just separate from it.

One might be tempted to reach for the word glam, a genre into which the band is often lumped, because Roth is the front-man who launched a million trips to the drugstore hair-care aisle, but also because so many, if not all, glam guitarists wanted to be Eddie. But while Van Halen profoundly shaped glam metal, even having been discovered by Gene Simmons, they were never really a glam band.

Instead, “Can’t Stop Lovin’ You”, with its anthemic chorus, lush backing vocals, heavy drums, keyboard-esque guitar, and metal guitar fills, is an amalgamation of all of these styles, somehow all of it and none of it.

“Don’t Tell Me (What Love Can Do)” is similarly bombastic without defaulting to keyboards. Hagar-era Van Halen was defined by bluster, but by keeping the keyboard sound and using a guitar to handle the instrumentation, the band finally fused the two concepts. It’s weird that such a guitar-heavy band took so long to come around to this concept, too. Van Halen kept keyboards in their live show, using a live-to-tape concept or Night Ranger keyboardist Alan Fitzgerald hidden well off-stage. So, on the one hand, they didn’t think enough of keyboards to give them a presence on stage, yet at the same time, they never considered having Eddie rework the keyboard parts into his guitar playing.

What’s so compelling about Balance is how the band finally figured out how to get both heavier and lighter. The cleaner guitar sound with a bit of crunch could no longer be considered brown, but the new, shiny sound, perhaps more of a plaid, put the band on a new trajectory. Because while I take Eddie at his word that he doesn’t listen to music, surely, by 1995, someone in the Van Halen camp realized pop music was getting dark and heavy. Eddie cut his hair and grew a goatee that threatened to extend into a beard. Even if he wasn’t listening to the music, he seemingly noted a changing cultural landscape.

Unfortunately, the Hagar-era of Van Halen would never get the chance to take grunge on directly. Balance hints at a heavier direction for the band, and “Humans Being”, which appeared on the Twister soundtrack, gives even more of a clue of where the band could have gone. One of the band’s more aggressive tracks, especially in the snarl of Hagar’s vocals, it opens with clean guitar, eventually moving into a downright head-banging groove, before exploding into a chorus that glistens like a diamond catching the sun just right. The tune pays out the promise hinted at on Balance.

Hagar left/was kicked out of the band soon after Twister. The band could have continued its musical evolution, but seemed worried fans wouldn’t follow them into a third lead-singer phase. Instead, they famously hired Gary Cherone, formerly of the band Extreme. That Cherone-fronted album, Van Halen III, seemed mostly designed to bring Roth fans back into the fold by making an album of guitar-heavy, riff-based, fairly vintage Van Halen rock and roll.

And it’s here that I wonder if Eddie Van Halen’s singular focus on his own music didn’t get in the way of the band’s development. Hagar was never fully embraced by the Van Halen faithful, which I accept, even as the rare fan who prefers him. Hagar was a different kind of singer than Roth and the band’s musical shift into gentler pop and more layered tracks coincided with his joining the band. But over four albums, the band found its way back to a heavier, guitar-centric sound that still kept Hagar’s more melodic aspects. However, Eddie might have wanted to bring the band all the way back to its roots, not necessarily realizing how much music and trends were changing. And not appreciating just how much his band had matured in the same way that parents don’t always notice their children growing because they see them every day.

And so the band went from a Roth-influenced sound eventually back to Roth himself, retreating into nostalgia and abandoning their pop swagger that, while certainly not grungey, had the big drums and prominent guitars of the genre. Which isn’t to say that a post-Balance Van Halen still fronted by Hagar would have eventually wound up headlining a Lollapalooza.

Pick up a copy of Balance here…