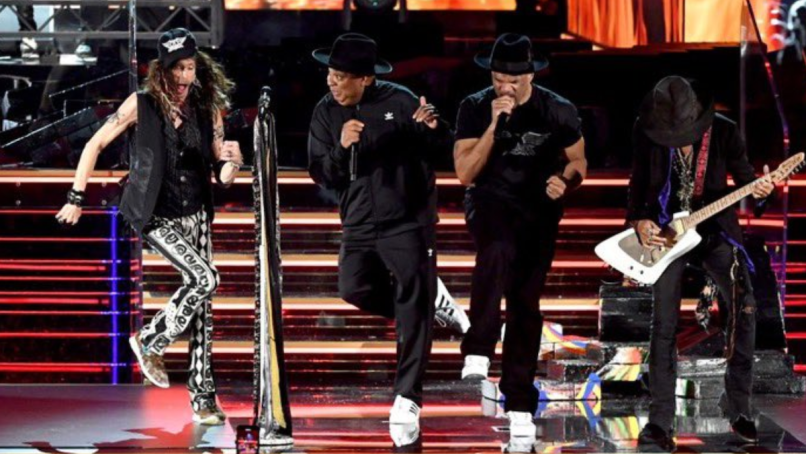 Aerosmith and Run-D.M.C., photo via Twitter/@RecordingAcad

Aerosmith and Run-D.M.C. joined forces for an explosive performance at the 2020 Grammy Awards on Sunday night. The performance came after Aerosmith were named MusiCares Person of the Year during a pre-Grammys gala event held two nights ago.

With someone who definitely wasn’t Joey Kramer playing drums, the rock legends came out first with “Living on the Edge”, which saw Lizzo joining in as Steven Tyler took to the crowd (her second performance of the night, technically). Then, as they went into their classic “Walk This Way”, the music cut as the great Run-D.M.C. busted out. They revisited their classic rap-rock rendition of the song — perhaps a bit sloppier with age, but no less wicked seeing two such iconic groups teaming up. At one point, Run’s DJs held up a Kobe Bryant jersey, and there was a killer shot of Flava Flav rocking out in the audience.

Aerosmith originally released “Walk This Way” in 1975. The rock hit was introduced to a new audience in the ’80s when it was covered by Run-D.M.C. on their album Raising Hell. The rap group’s version is thought to be one of the first mainstream singles of the rap-rock genre.

Aerosmith will continue their “Deuces Are Wild” residency in Las Vegas later this month, and you can find your concert tickets here.

This year’s Grammy Awards has also seen performances from The Jonas Brothers, Tyler, the Creator, and Gwen Stefani and Black Shelton. There was also a Prince tribute featuring Usher, Sheila E., and FKA twigs  To stay up to date on all of the ceremony’s big moments, make sure to follow our complete Grammy Awards 2020 coverage.

Other than BTS – Aerosmith was one of the most epic concerts I’ve been to. They’re legends! pic.twitter.com/czmdFjOzw9

RUN DMC with Aerosmith and Kobe Bryant jersey in the back#Grammys2020 pic.twitter.com/Gs6EIT9shq

YAASSSSS!!!!! #RunDMC joins @Aerosmith on stage at the #GRAMMYs for their iconic collab 🔥🔥🔥 pic.twitter.com/KyigOxWc47