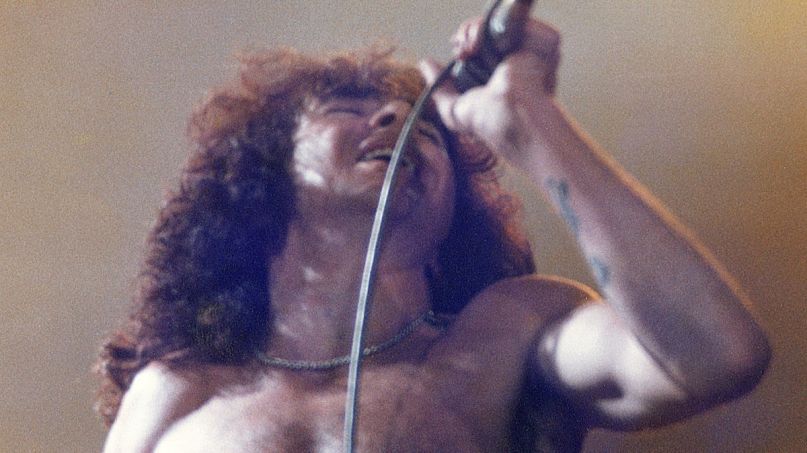 Greg Prato is a regular contributor to Heavy Consequence and an author of several rock books. His latest book is titled A Rockin’ Rollin’ Man: Bon Scott Remembered, a look at the life and career of the late AC/DC singer. Here, Prato remembers Scott in an exclusive piece for Heavy Consequence using quotes from the newly released book.

It’s hard to believe that the great Bon Scott passed away so long ago — probably due to the fact that the “Bon-era” of AC/DC is possibly more popular than it’s ever been. Case in point, attend a sporting event and it is only a matter of time until you will hear “TNT”, “Highway to Hell” or another oldie but goodie by the band.

Another hint that this Bon Scott’s music is as relevant as ever is that four of the 10 most listened to AC/DC songs on Spotify at the time of this article’s writing are indeed Bon-sung (“Highway to Hell” sitting at No. 1, while “TNT”, “Dirty Deeds Done Dirt Cheap”, and “It’s a Long Way to the Top (If You Wanna Rock n’ Roll)” are also all represented). But the sad fact is that on February 19, 1980, Scott died at the age of 33 (both “acute alcoholic poisoning” and “death by misadventure” are listed on the death certificate).

As a long-time AC/DC fanatic, I started interviewing renowned rockers who I knew were admirers of the Bon-era. The quotes you see in this article are taken from my book, A Rockin’ Rollin’ Man: Bon Scott Remembered.

Many fans still remember the first time they were exposed to the Bon-era of AC/DC, including AC/DC’s drummer from 1983 through 1989, Simon Wright. “It must have been ‘78/’79. There was a radio program on in England every Friday, called The Friday Rock Show — and the DJ was Tommy Vance. And he played I think ‘Let There Be Rock.’ I’d never heard it before, and I thought, ‘What the hell is this? This is cool — I’m having some of this!’”

Wright added, “And then I think a couple of weeks after that, they had this new thing on television, too — Sight and Sound. It was a first, because you had your TV, and then you could tune in to a channel on the radio, and have it coming out of your speakers, as well as on the TV — which was quite revolutionary back then. But I remember sitting there with my dad. Nazareth were going to be on it. But all of a sudden, it wasn’t Nazareth — they had to cancel for some reason. And it was AC/DC. We just sat there, gobsmacked. It was incredible — we’d never seen anything like it.”

Over the course of five studio albums and one live album released in the United States, a valid argument could be made that the Bon-era of AC/DC is one of the few instances in rock history where a band did not offer a single stinker track on any of their albums. In other words… all killer, no filler.

Fozzy singer and professional wrestler Chris Jericho agreed that the list of Bon classics is endless. “You can go through every album — Dirty Deeds, T.N.T., or Highway to Hell. But there are songs that should have been bigger hits, like ‘Touch Too Much’, ‘Problem Child’, and then you get the more obscure ones, like ‘Beating Around the Bush’, ‘Kicked in the Teeth’, and ‘Squealer’. Oh my gosh, every time I hear ‘Squealer’, I feel like I need to take a shower afterwards! Like, who would write a song [nowadays] called ‘Squealer’? The #MeToo movement would lose it!”

And despite Bon coming off as a rowdy rocker on album and onstage, former Judas Priest guitarist K.K. Downing explained that this was not entirely the case offstage. “Bon was an absolute gentleman. There was no doubt that Bon used to like to have a drink — he always had a bottle onstage with him or whatever. But I can tell you this now, when we’d get up in the morning [when Judas Priest supported AC/DC on their “Highway to Hell Tour” in Europe in 1979] — whether it was airports or whatever it was — Bon would always be there, well-dressed, well-presented. Just like he was going out for the evening.”

And then of course, there was Bon’s singing, which remains one of the most instantly recognizable vocal stylings in rock. “It’s the sound of his voice man, hands down,” declared Pantera singer Philip Anselmo. “I don’t even know what you’d call it — it’s almost like an Aussie drawl. He had the pronunciation and attitude. Attitude is a big thing, for sure. I guess when you’re talking about ass-kicking rock n’ roll, it’s tough to out-do AC/DC.”

According to Anvil’s Steve “Lips” Kudlow, the reason is simple as to why the Bon-era of AC/DC has enjoyed such staying power over the years. “Because it’s timeless. It doesn’t matter when you hear those songs. There is a timeless aspect to it, and that’s what makes it special. Any band that can write in such a way that it’s timeless is going to last forever, and will way, way surpass their own lifespan. That’s just the way it is.

Lips continued, “I don’t think that they zeroed in on any particular trend — they made a trend. And I think that is ultimately the difference. Bands that make trends last forever. Bands that follow trends are here today, gone tomorrow. That’s the way I see it.”

There is perhaps no singer that is as big a Bon admirer as Exodus’ Steve “Zetro” Souza (during his downtime, he fronts his own tribute band, AC/DZ, who clearly knows how he’d like Bon to be remembered. “As a pioneer — for guys like myself. An innovator — a lyrical innovator, when it came to writing dirty, dirty songs. It’s unfortunate that he wasn’t alive for the induction at the Rock & Roll Hall of Fame, because he deserved it. He was a big part of that. On the radio, they’re still playing ‘Dirty Deeds’ to this day…and they play ‘Back in Black,’ I get it, but they also play ‘Dirty Deeds’ and ‘TNT’—I hear that all the time on the radio. He’s going to be dead 40 years now, and we’re still talking about him. The legacy is still there.”

In one of the quickest turnarounds in rock history, AC/DC invited Bon’s replacement, Brian Johnson, to join the band on March 29, 1980 (barely over a month since Bon’s passing), and in April, were in Compass Point Studios (in Nassau, Bahamas), laying down tracks for their first post-Bon recording. On June 29th, AC/DC launched a world tour, and on July 25th, Back in Black was released! And the “new look” AC/DC knocked it out of the park with their first at bat — at last count, Back in Black was certified 25-times platinum in the United States alone.

While AC/DC finally obtained massive global commercial success with Johnson as their vocalist, the Bon Scott era of the band will always be revered by fans worldwide.

Greg Prato’s new book, A Rockin’ Rollin’ Man: Bon Scott Remembered, is available now, and can be ordered via Amazon.