Grimes Finds a Creative Spark on the Magnificent Miss_Anthrop0cene

Claire Boucher’s fifth record is her darkest, most ambitious project yet 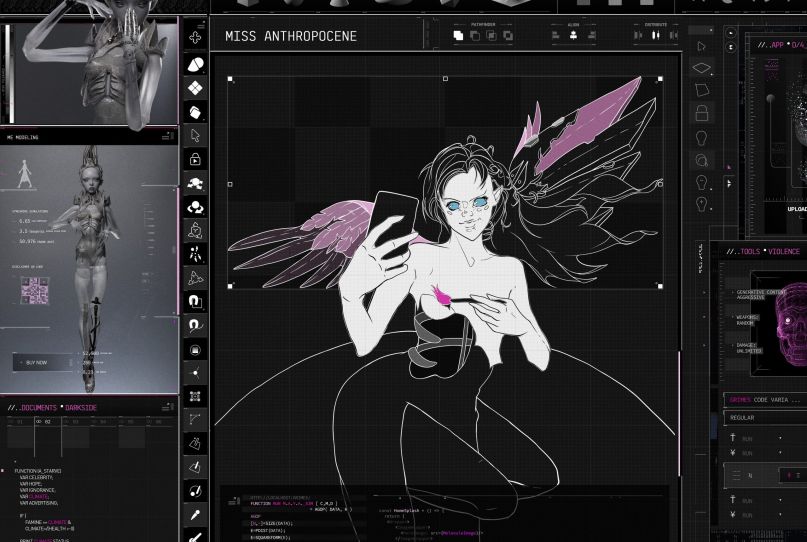 The Lowdown: Since the 2015 release of Grimes’ fourth album, Art Angels, Claire Boucher has stayed busy. She started dating tech mogul Elon Musk, streamed Bloodborne with Purity Ring’s Megan James, worked with Janelle Monaé and Bring Me the Horizon, and most recently, became pregnant with her first child. Grimes had also been clashing with her record label, 4AD, to let her release new music a couple of years ago. Five years later, she has released the follow-up to her poppiest record yet with her darkest record yet, Miss_Anthrop0cene. After deeming Art Angels “a stain on [her] life,” it’s clear that Grimes wanted to make something different than anything she’s done before. Miss_Anthrop0cene comes across as her most ambitious work yet, and that ambition pays off.

The Good: Each of Miss_Anthrop0cene’s 10 tracks is an embodiment of mortality and how humankind is inching ever closer to extinction. Consequently, it’d be impossible to not discuss climate change in the midst of this. Miss_Anthrop0cene is both a play on words (a combination of “misanthrope” and “Anthropocene”) as well as the protagonist of the record’s narrative, who Grimes describes as an “anthropomorphic Goddess of climate change.” The single “Violence” centers on an abusive relationship between Earth and humanity. “You wanna make me bad, pay me back,” she sings over a synth-heavy, four-on-the-floor dance beat. It’s a clever depiction of the not-so-natural disasters caused by human activity. “Before the fever” revolves around finding love in imminent death, and its title track also hints at Earth’s rising temperatures. “This is the sound of the end of the world,” Grimes sings in a reverb-drenched lower register. Some songs explore death in a different light, such as the guitar-centric “Delete Forever”, on which Grimes laments the victims of the opioid epidemic as a strummed acoustic guitar and finger-picked banjo accompany her.

Miss_Anthrop0cene’s instrumentation finds itself at the crossroads of both Visions and Art Angels. It merges the darker ethos of the former while adopting the dance-esque rhythms of the latter. “Darkseid” acts a perfect microcosm with its boisterous 808s and eerie tapestries of synths. However, that’s not to say that Grimes doesn’t tread new territory. “4ÆM” combines Bollywood-inspired melodies with drum and bass, “Delete Forever” incorporates folk, Britpop, and dance, and “My Name Is Dark” meshes nu-metal with indie rock. Despite this amalgamation of genres, Miss_Anthrop0cene never feels unfocused. Everything is tied together through its thematic material, impeccable layering, and stellar production.

The Bad: Occasionally the aspirations of Miss_Anthrop0cene overstay their welcome, but only briefly. Tracks such as opener “So Heavy I Fell Through the Earth” and closer “IDORU” drag on a bit toward the end, but it seldom detracts from the album’s sharp songwriting. As impressive as Art Angels’ pop sensibilities are, it’s also welcoming to hear Grimes take more risks in her music’s structure and composition.

The Verdict: Grimes has never sounded more sure of herself than on Miss_Anthrop0cene, and this conviction in her ideas and creative outlook largely benefits this record. By consolidating the stylistic elements of her previous two works, Miss_Anthrop0cene lies at the intersections of Grimes’ past experiments while forging something entirely new to her discography. Miss_Anthrop0cene is the perfect Grimes record for 2020, delving into topical themes such as climate change with an eclectic mix of genres. It’s certainly her darkest, most ambitious project yet, and it works on nearly all levels.

Essential Tracks: “Delete Forever”, “Violence”, and “My Name Is Dark”