Jewel’s Pieces of You Was Sensitive Whitegirl Schlock, But It Was Ours 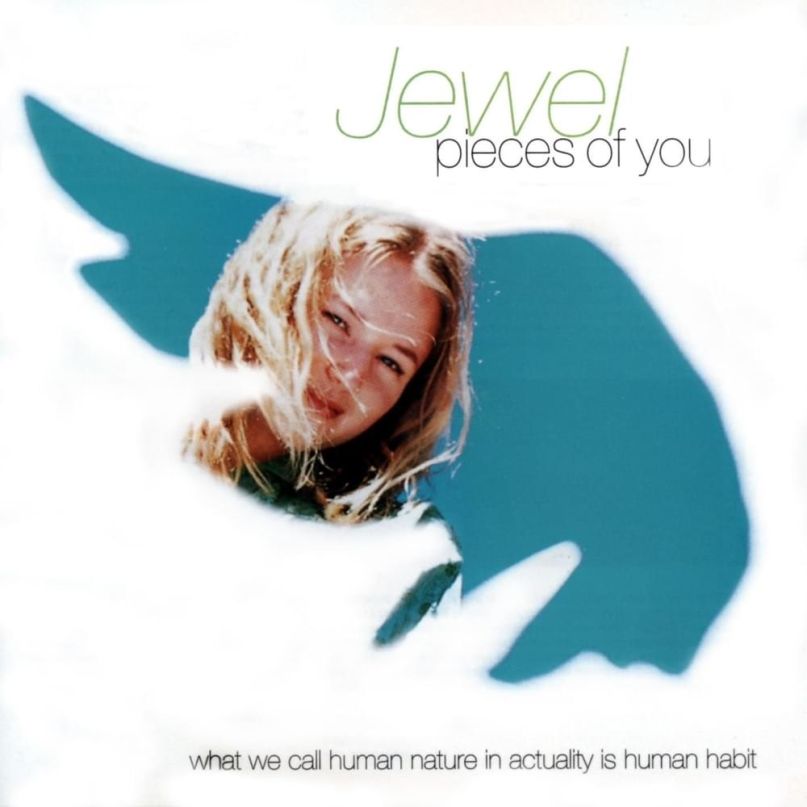 I was seven or so when Jewel’s Pieces of You was released, which makes me unqualified to write or even think about it in an unbiased way. It was the first album that was mine (next was the Spice Girls’ Spice and then, inexplicably, The Wallflowers’ Bringing Down the Horse; after that, I lose track).

What I remember is sitting cross-legged on my bedroom floor, tugging stray nubs from the rug as I listened. I had an imagination that was, let’s say, superabundant, and a somewhat tenuous grasp on reality. Somehow, I had decided that I wanted to be a dog-sled racer (I came from a mid-sized Midwestern college town: not a sled in sight). Approximately half of Jewel’s appeal was due to the fact that she came from Alaska, where, I assumed, everyone raced dogs, or else why would they live there?

And then the other half of her appeal came from her moody, broody songs, which seemed to open up a cavernous space in my moody, little self. “This is my heart bleeding before you,” she howled on “Foolish Games”, and I was right there with her.

“I gave voice to my deepest fears, insecurities, and dreams,” Jewel wrote in her 2015 memoir, Never Broken. “I wasn’t a size 2, I wasn’t cool, and I wasn’t that good. I was earnest and sincere, and those things made me feel honest.” They also made her a frequent source of mockery.

In Entertainment Weekly, David Browne described Jewel’s onstage presence as a “strumming contradiction, confident yet ditsy,” while Pieces of You was “wimpily produced” and “cringe inducing,” with liner notes that “read like high school lit-magazine entries.”

The revered (or self-revered) Robert Christgau deplored Jewel’s “abiding love for her own voice” and claimed that with “her breathy little-girl innocence and breathless baby-doll sexuality, her useless ideas about prejudice and injustice,” Jewel “may well prove as insufferable as any hollow-bodied guitarist ever to get away with craving the world’s adoration.”

Nothing inspires this kind of vitriol quite like a young woman describing — without irony, apology, or a very precisely calibrated sexuality — her own, you know, feelings.

And god forbid she has feelings about the things she sees around her. Which is not to give every pretty, little whitegirl a free pass to say any and every stupid thing that comes to mind, free of criticism, but merely to point out that the ridicule Jewel faced far exceeded anything actually “cringe inducing” in her work. Which: granted, there are moments. I can see that now.

But dang, boys. Maybe the criticism would be easier to stomach if it didn’t arrive so blatantly steeped in misogyny. Browne took issue with either Jewel’s confidence or her “ditsy” playfulness, and as for Christgau, where do I even start? His disgust with what he calls her “abiding love for her own voice” has its corollary in those morons who value, over everything, pretty girls who “don’t know” they’re pretty. Listen to me: there is no way to avoid knowing.

And as for Pieces of You, look, I will stand by this: “Who Will Save Your Soul” is not a bad song. It’s clever in its rhymes, its tumble-down rhythms. That bass line is cute as hell. I still like the line about how “the cops want someone to bust down on Orleans Avenue.” And: “there are addictions to feed and there are mouths to pay,” which I remember thinking, at seven or whatever, was just the height of wit and okay, so maybe it’s not the absolute height, but it isn’t quite the pits and more important is what you miss by ripping the verses apart like this — that is, the way the whole thing fits together as neatly as — as neatly as what? As a house of cards:

Some are walkin’, some are talkin’, some are stalkin’ their kill
Got social security, but it doesn’t pay your bills
There are addictions to feed, and there are mouths to pay
So you bargain with the devil, say you are ok for today, say
That you love them, take their money and run
Say it’s been swell, sweetheart, but it was just one of those things,
Those flings, those strings you’ve got to cut
So get out on the streets, girls, and bust your butts

In any case, it’s not that hard to imagine, say, Bob Dylan, on the strength of this song alone, inviting Jewel to go off on tour with him — which is what he actually did, and opening for him helped launch her career. I’m not even making this up.

But I hate to even go there because the last thing this girl needs is one of the boys inviting her into the boys’ club. What is that if not the opposite side of the same damn coin? But there it is.

Then there’s “I’m Sensitive”, which really does contain the lines: “Please be careful with me/ I’m sensitive, and I’d like to stay that way.” Everything in me is straining to hear some irony in her voice, which, yes, she’s shrunk down to little-girl size — which, if it isn’t something we haven’t all done, is something that some of us might occasionally have done, despite our best selves — but I certainly didn’t hear any irony as a kid, when I bopped my sensitive, little head along to the beat and, more likely than not, thought, “Me too!”

On the other hand, “You Were Meant for Me”, with its pancakes and PJs, was — yes it was! — one of the great ballads of the ‘90s, and that’s all I have to say about it. About Pieces of You, about all of it. Yeah, it was schlocky, and sappy, and sad, but goddamn, it was delicious.