Beyond the Boys’ Club: Mixi Demner of Stitched Up Heart 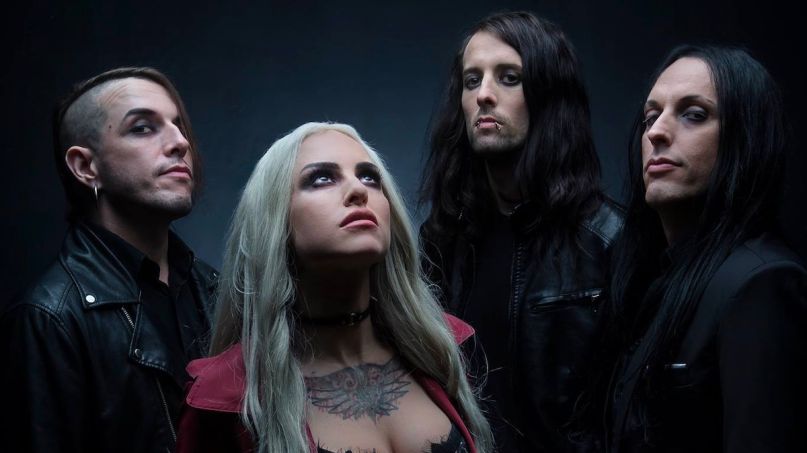 Beyond the Boys’ Club is a monthly column from journalist and radio host Anne Erickson, focusing on women in the heavy music genres, as they offer their perspectives on the music industry and discuss their personal experiences. This month’s piece features an interview with singer Mixi Demner of Stitched Up Heart.

Los Angeles rockers Stitched Up Heart built their following the hard way: touring the country in a single van, playing club after club, and hoping to have enough gas money to make it to the next venue.

The hard work paid off. Since forming, Stitched Up Heart have collaborated with Sully Erna of Godsmack for the track “Lost,” garnered high spots on a variety of Billboard rock charts, and built a loyal, passionate following of fans.

Stitched Up Heart’s new album, Darkness, will arrive March 13th, and the band will support Sebastian Bach on a spring tour.

Vocalist Mixi Demner recently spoke with Heavy Consequence for the latest “Beyond the Boys’ Club” column, discussing the new album, musicians who inspired her, what advice she offers young women looking to get into the music world, and more. Read the full interview below.

A lot of the lyrical content on this album ties into one of the songs on the album that’s called “Darkness”, and it’s about going through dark times over and over again and not being afraid anymore, because you know you’ve made it out before. Lyrically, it isn’t a sad album, but it’s not like everything is okay and there’s sunshine and rainbows. There’s stuff you have to go through to get to this place and be strong.

It completely changed. Originally, I wanted to go into this album with the strength that you can do anything and nothing can stop you, but the songs I was writing were not coming out authentic. I can be strong sometimes, but it takes a lot of dark stuff to get to that strength and know you can overcome it. So, the vision changed to pulling from those things that made us strong.

On what she hopes fans take away from Darkness

I hope it reaches and touches people at a different level. I hope people relate to it and can connect with it. It’s kind of scary to release music that you’ve been working on so long! We wrote 70 songs for this record, and it’s scary, so I’m hoping people like it, but I’m happy with how it came out, so all you can do is hope people dig it.

When we do release the whole album in March, we’ll have a couple new songs, but it’s kind of like a compilation — a waterfall effect. I was interested in how music has changed with less people buying albums and more people streaming, so this was something we tried to do that not a lot of the rock bands were doing. We have been giving people some new material every month or two, so on Darkness, we’ll have a few new songs, and then you’ll be able to purchase the whole thing at once.

When I first started listening to heavier music, it was the days of No Doubt and Avril Lavigne and Alanis Morissette, so it was kind of that grunge or ska sound for No Doubt. So, maybe that inspired this whole new movement of women, plus the stuff before, like Lita Ford and Joan Jett — all those women who started playing guitar back then. It re-inspired the next generation, because you get it in your head that women can do this, too. I feel like at this moment, we have the most women [ever] in heavy music, and I hope it continues to grow. Even now, it’s a huge difference between how many men are in heavy music verses women.

I think more so than maybe 10 years ago, but I think there still needs to be more if it. It’s still a thing where people are more closed off to women in rock and and metal than men, so there’s still work to be done.

On the artists who inspired her to get into music

My mom recently told me that I used to watch Jem and the Holograms, which was a cartoon with an all-girl band from the ’80s. My mom said that when I was a little girl, maybe even before elementary school, when she asked me what I wanted to be when I grew up, I said, “I want to be Jem! I want to be a rock star!” That was probably the first thing I know of, and in middle school, I got my first CD, which was Rancid. My neighbor’s dad had a huge collection of heavy music — Nine Inch Nails, Metallica, and more. I would go over to his house and borrow his CDs and record them on cassette.

I would say that you have to have thick skin. Be prepared to be told “no” over and over again. Don’t listen to what anyone says, and work hard. You have to be around stinky boys all the time, and touring is not glamorous! You travel so much, and I think the first tour anybody does, they think it’s going to be easy. But … never quit. Keep working hard. Don’t listen when people tell you that you can’t do. With everything you do in life, people will say that you can’t do it, and you need to keep doing it. Follow your heart!

Our thanks to Mixi Demner from Stitched Up Heart for taking the time to chat with us for this month’s Beyond the Boys Club column. Stitched Up Heart’s new album, Darkness, arrives March 13th, and is available for preorder.