The singer quips that look-alike members can eventually take over 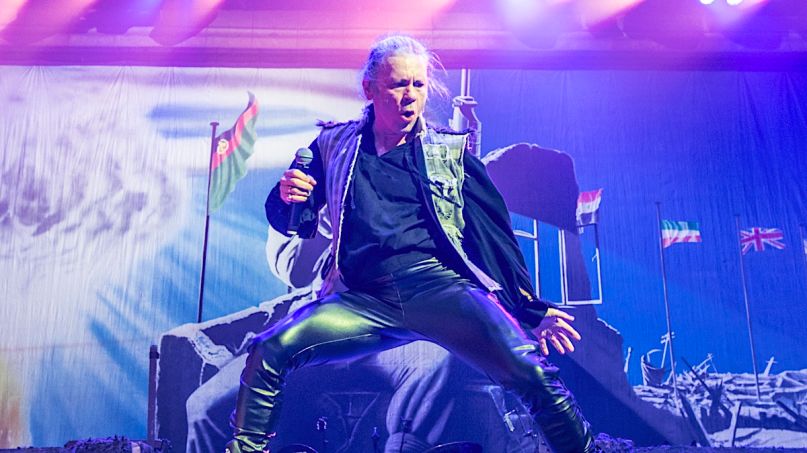 Since forming in 1975, Iron Maiden have been arguably the most prolific heavy metal band ever. And with a new album possibly out in 2020, they show no signs of stopping. Now, singer Bruce Dickinson says there’s no end in sight, declaring the band will never retire.

During an unscripted Q&A after a spoken-word performance on Saturday in Bucharest, Romania, Dickinson was asked what would happen to Iron Maiden when its members retired. At first, Dickinson sarcastically painted a future where the band is performing with look-a-likes of its current lineup. Then he got to the punchline.

“I like that. There’s always hope. ‘After the current members retire,’ there’ll be a whole load of Iron [Maiden] members,” Dickinson said (as transcribed by Blabbermouth). “We won’t even have to [use] f**king holograms. You know what I mean? You can actually have real Iron Maiden members that kind of look like us but are not us. That’s good. I like that. It’s not a bad idea. Then we can just sit back and [collect] royalties and do no work. Good idea! It’ll never happen, because we’re never going to f**king retire.”

Dickinson reaffirmed bassist Steve Harris’ sentiments on the same subject. Harris previously told SiriusXM’s Trunk Nation that the band had no immediate plans to retire — as long as they can still physically play well.

“We all feel that if we feel we’re not cutting it anymore, then we’ll discuss it and that will probably be the end of it,” Harris said. “But at the moment, we don’t feel like that. We feel that we definitely still are pulling our weight, so to speak. We’re just doing well. So far so good. I don’t wanna tempt fate, but we are doing good.”

Iron Maiden apparently finished recording a new album in 2019, with producer Kevin “Caveman” Shirley hinting that it could see a 2020 release.

Meanwhile, Maiden will continue their “Legacy of the Beast Tour” with a new round of 2020 dates in Australia, Japan, and Europe. Tickets are available here.