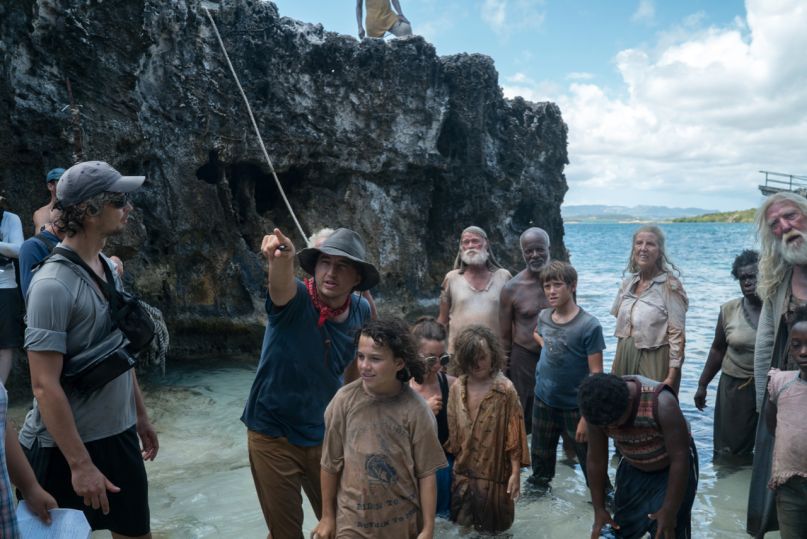 It’s been eight years since writer/director Benh Zeitlin made his breakout debut with the entrancing magical-realist fantasia Beasts of the Southern Wild, a film that garnered raves out of Sundance and an Oscar nomination for its first-time director. And yet, his latest film, Wendy, feels like it could have been made the following year: another tale of childhood imagination set amid the backdrop of a rust-coated bayou fantasy land, with non-professional child actors at its center.

This time, Zeitlin’s eye turns to a bayou-chic retelling of J.M. Barrie’s Peter Pan stories, re-centering the tale on Wendy (Devin France), the young daughter of a working mom at a New Orleans greasy spoon who finds herself, along with her twin brothers (Gavin and Gage Naquin) tagging along with a mysteriously puckish boy named Peter (Yashua Mack) to a mysterious volcanic island that keeps them young forever. It may tread on similar territory as Beasts, but an older, wiser Zeitlin seems more aware of the looming tragedy of growing up, and yearns to find a balance between the two.

Following its Sundance debut in January, we were rather taken with Zeitlin’s Malick-ian aesthetics and creative reconstitution of the Peter Pan story. Now, in celebration of the film’s wide release today on February 28th, Consequence of Sound sat down with Zeitlin to talk about the long, slow process of bringing Wendy‘s rag-tag fantasy to life.

Just this! I’ve been making the movie this whole time. It really took seven years to make. We had the idea at Sundance; I remember talking about it before just as we were realizing that this crazy thing was going to happen with Beasts. Then it was a year promoting Beasts, and really just straight out of that. I traveled to Montserrat in 2013, and spent the better part of that next four years scouting incredibly remote locations and rewriting the script based on that.

The casting process was extremely extensive, trying to find all these kids. The way I work in the process, everything affects everything else. So that entire time, you’re discovering the movie, and everything is shifting and being developed. And the kids needed to a lot of time to learn how to swim, sword fight, jump off a bridge, you know, all that kind of stuff. So there was a real sweet spot, when they were the right age to shoot the film — not too young, not too old. There’s kind of a dance of figuring out exactly when the right point to go was, which turned out to be 2017.

When we cast Yashua Mack, who plays Peter, he was five years old; he could barely read, barely swim. That was across the board, none of these kids have any kind of acting training whatsoever, but they’re incredibly talented. It really took about two years to get to where we felt they were at a point where they could own their characters and control them, and where we had a script that matched up with who they were and where they were going to be able to excel.

It’s different for each actor, honestly. You’re on all the time, you know. I’m usually inches away from the actor, that’s where I like to be on set. I’m not sitting behind a monitor, I’m, like, right there in the scene with the kids. We spent years getting to know each other rehearsing, to really have an understanding of what makes them tick. But a lot of times, it’s just visceral. It’s like being a football coach or something like that. You’re trying to amp up the energy or trying to push emotion. Even when the cameras are rolling: “Again, again, louder, louder, louder.” You sort of pump yourself up.

On having a sense of play on set

That’s kind of key. If it’s not fun, the kids won’t like it. That’s the thing where you most quickly go from a good performance to a bad one — if the kids aren’t having fun. And oftentimes, film sets are truly not fun places. So it’s a real dance to keep the set their playground, while also getting the film shot. It’s always a struggle.

On finding the perfect Peter and Wendy

There aren’t two people in the world that could have played these parts, you know? When you find them, it’s absolutely right. Devin [France, who plays Wendy] actually comes from a town like fairly close to where [Beasts of the Southern Wild star] Quvenzhané [Wallis] is from, like 15 minutes away. In Louisiana, we did a massive grassroots casting search. We’re in schools, we’re trying to find kids that have raw talent, but have never had the opportunity before. And it’s not like a lot of these schools have theater programs; we’re trying to find real kids who have a spirit that connects to the character.

She came to a library right by her school. You meet her, and she’s not necessarily who you imagine, she doesn’t look or act like what you wrote, but there’s some sort of spirit that connects with the themes of the film and the character. A lot of times, I’m looking to learn who the character is from a real person whose life experience or personality connects with the character. So for her, it was this mix of her incredible bravery, but incredible sweetness, in a way that felt like the two things were connected. I remember noticing that in her.

For Yashua, we wanted to find a kid for whom play and joy and mischief was everything. We wanted someone very young, who was kind of at that stage before you really start thinking about the consequences of your actions in any real way.

On taking the classic Peter Pan story in a new angle

Peter has been a myth and a character that persists throughout my life. Me and my sister Eliza [Zeitlin], whom I wrote the film with, we decided early we didn’t want to remake anything, or even tell the original story necessarily. It was about taking the framework of the myth and telling a new story with those elements and those themes. The thing we were really interested in, especially for me, was this tension between care and freedom, this feeling that, as you grow up you have to make a choice: you can choose to be wild and free and do whatever you want. But if you do that, you do it at the expense of having family or children, you know, and that you have to sacrifice one to make the other. I think that experience is something I was certainly thinking about and felt universal.

On conceptualizing his version of Neverland

There was an early idea that the source of youth was going to be a volcano. We wanted to take the things in the original text that felt like fairy magic, or totally distancing, things that made it a pure fantasy and connect them to the real world. So this idea that the volcano was going to be the source was central, which of course doesn’t leave you with a lot of options.

But I’d heard of the island of Montserrat before from a friend who’d grown up there, and I was just blown away by the natural beauty of the place. It wasn’t just that the volcano has incredible rainforests and these towering cliffs over violent beaches and rock formations. It was just a spectacular, natural wonder. Then also, I started connecting with the people there. I spent the better part of four years there writing the script and scouting.

We had incredible friends, allies, and help on the island to make a film, nothing that had ever been done before there. We have to build the infrastructure from the ground up, and it was a true adventure.

On designing the giant Tinkerbell-like ‘Mother’

We wanted to push the limits of what could be done with practical underwater photography. What you’re looking at with the Mother is not CGI. We started off with a 35-foot, diver-operated underwater light-up puppet, which has to be one of the most complicated things anyone’s ever tried to build for a movie. It was all designed by my sister and Jason Heymer in LA, and an amazing team of artists.

We had this idea that she comes from the heart of the earth, and we wanted to connect Mother Nature to joy in this really intense way where, when nature is joyous it’s connected to youth, and the sort of things that keep us alive and young. We wanted nature to be protecting these children in this, and to give that a voice and a character.

So we started at this idea that she originated at the center of the Earth, like breathing off of hydrothermal vents. We looked at a lot of the microscopic organisms that live there, combined them and then blew her up to massive proportions.

On bringing Dan Romer back to do the music

He’s my greatest collaborator. All the music I’ve written for films, I’ve collaborated with Dan.

I’m a very primeval songwriter, and he’s just incredibly fluid and adaptable, a brilliant writer and orchestrator. The whole score [forWendy] started in a bar: I had the beat in my head, so I pounded on the table and sang the song that the Mother sings, you know?

That was our starting point. We knew the bones of the score were going to be a lullaby of sorts, the songs that a mother sings to a child. So there were two central lullabies, the one Wendy’s mom sings to her and the one the mythic Mother sings to the Lost Boys.

Those two melodies were the framework, and then we wanted to bring a new, frantic, youthful energy to the score, just anxious striking violins with wood. Things that felt like, if you tossed a kid into a room full of garbage and orchestra instruments, what would they do with it?

On making films about children’s experiences

I think my films are an expression of how I see things, and each film has its own choices and aesthetics. But yeah, the messiness and the chaos is something that I’m really attracted to as a process. My favorite films often are ones where the director clearly just saw every moment of it and just executed it to total perfection, like a Coen Brothers film or something like that. For me, what I love about making films is the journey and the experience and interacting with the world via a story, and letting those elements teach me what the film is and guide me and take me places I never expected to go. That process is one I really love and I’m going to continue to make my work in, I think.

I’m not only going to make films about kids! I think that was a continuation of the experience of working with Quvenzhané and watching her be Hushpuppy, then watching her grow up as a person. A lot of those themes led me to Wendy, you know. It felt like there was another movie to make about an older young girl. There was continuity there. This one has led me to think about old age in ways I’m excited about. I think, for me, one film is always going to lead me to the next, and there will hopefully be a flow to that as I continue to make films.

Wendy is currently in theaters via Searchlight Pictures.