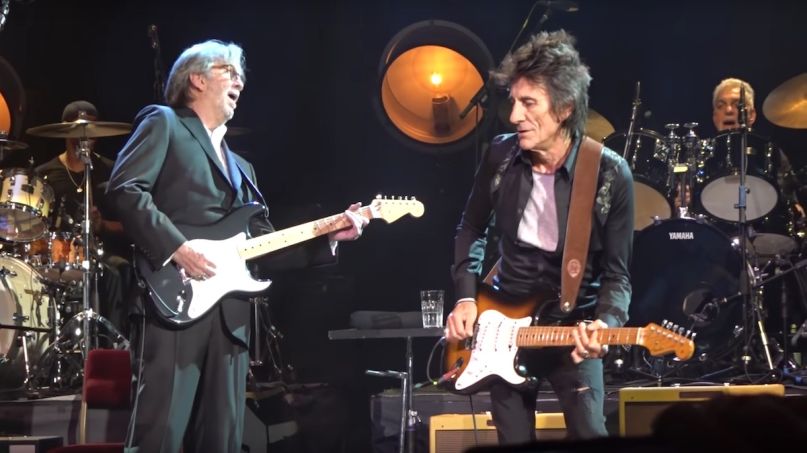 Eric Clapton and Friends - A Tribute to Ginger Baker, screenshot via Youtube/Banfibill

The concert, dubbed “Eric Clapton and Friends — A Tribute to Ginger Baker”, took place at Eventim Apollo Hammersmith in London, England a few months after Baker’s death. Clapton and company performed a total of 15 songs at the show, including their emotional rendition of “Crossroads” as an encore, notes Ultimate Classic Rock.

Clapton and Waters kicked things off with arguably Cream’s biggest hit, “Sunshine of Your Love”, before inviting Wood and Jones onstage to join them for “White Room”. Rodgers played during “Tales of Brave Ulysses”, “Presence of the Lord”, and “Well All Right” while Winwood hopped in for “Had to Cry Today” and “Do What You Like”.

This was the latest in a string of tributes honoring Baker. But considering Clapton has spoken honestly about his difficulties playing live these days, not to mention the fact that he’s going deaf, this may be the most touching of them all.

Below, watch select highlights from the concert and check out the setlist in full.

Setlist:
Sunshine of Your Love
Strange Brew”
White Room
I Feel Free
Tales of Brave Ulysses
Sweet Wine
Blue Condition
Badge
Pressed Rat and Wart Hog
Had to Cry Today
Presence of the Lord
Can’t Find My Way Home
Well All Right”
Do What You Like” / “Toad