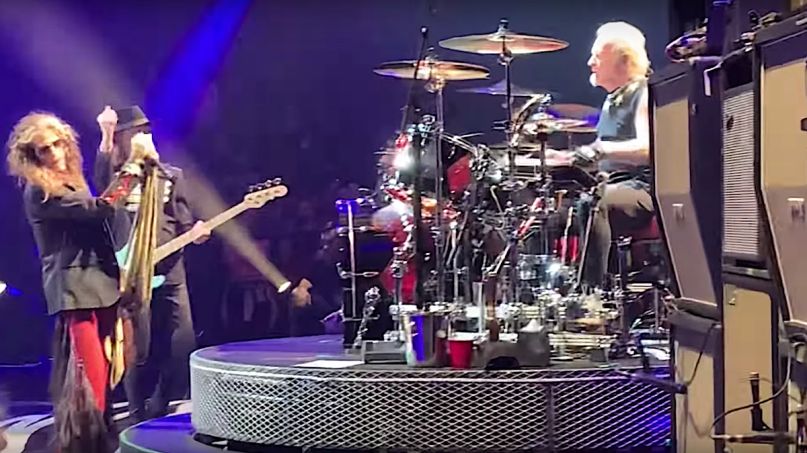 After an ugly episode that saw Joey Kramer engaged in a legal battle with Aerosmith, the drummer is back in the saddle with the legendary rock band. On Monday night, Kramer rejoined Aerosmith as they continued their Las Vegas residency.

To quickly recap, Kramer suffered injuries to his shoulder and foot last year, with his drum tech John Douglas filling in for him as Aerosmith performed their “Deuces Are Wild” Vegas residency and other gigs in 2019. Last month, Kramer sued the band in order to be reinstated into the group to perform with them at the MusiCares Person of the Year event and the 2020 Grammy Awards.

Aerosmith apparently had auditioned Kramer to see if he was up to the task, and determined that their founding drummer was not “emotionally and physically able to perform with the band.”  Video even surfaced of Kramer being turned away from Aerosmith’s rehearsals in Los Angeles. Ultimately, a judge ruled against Kramer, and Aerosmith played those high-profile gigs without him.

Now, it looks like all is well in the Aerosmith camp as of last night. Kramer was back behind the kit as the Rock & Roll Hall of Fame act played the latest gig of their residency at the Park Theater at Park MGM in Vegas. When a large set piece rose to reveal the band, singer Steven Tyler announced, “On the drums, Mr. Joey Kramer” as the stickman made his way to the kit to play the opening number, “Let the Music Do the Talking.” Fan-filmed clips can be seen below.

Aerosmith kicked off the latest run of their Vegas residency on January 29th. They’ll play shows through this Saturday (February 15th), before returning to Sin City for another run of gigs in May and June. Pick up tickets here.

See video clips of Aerosmith’s Monday night Vegas gig, as well as the setlist, below.

Encore:
Dream On (with “Angel” snippet)
Walk This Way